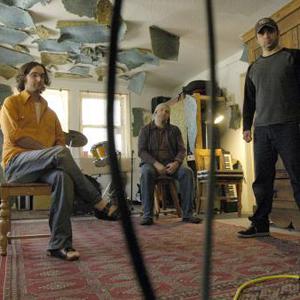 "ViV, a band that's beginning to make some noise." Heralded by the San Jose Mercury News as the local musicians most likely to make their mark, ViV is an alternative rock band from San Francisco that relies on well-crafted songs performed with respect and integrity for the music. Their albums have been successful calling cards and their live shows continue to build their fan base at every show. To see ViV play live is a real "show" where they incorporate projected images, samples and backdrops that enable the band to convey a unique feeling for each song in each show they play.

This captivating Bay Area quintet has created a persuasive blend of music that is richly American heartland rock steeped in British pop. In one of their most recent reviews it was succinctly put that Viv is a "roots-indie hybrid" and the band agrees.

Front man, singer and songwriter Matt Ostrander is joined by Erik Semo on bass, Andrew Griffin on drums, Justus Dobrin on keys and Mike Fiorentino on violin, and guitar. Since their formation in 2001, ViV has rapidly grown a cult following nationwide, playing over 300 live shows in just three years and drawing on the emotions of audiences of all ages.

With the release of their sophomore album Flawed, ViV has made a strong, confident musical statement. The album has tracks produced by David Cole (Melissa Ethridge, Cake), Adam Rossi (LUCE), Thom Canova and by the band themselves. There are also guest appearances from friends Dave Immergluck (Counting Crows) and Bruce Kaphan (American Music Club).

ViV can be seen touring the east coast and west coast regularly.