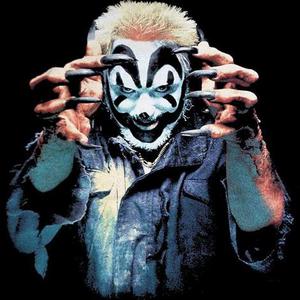 Joseph Bruce, (born April 28, 1972 in Wayne, Michigan) better known to the world as Violent J of the Insane Clown Posse formerly known as Inner City Posse. He is also the co-founder of the record label of the band, Psychopathic Records, with fellow ICP rapper Joseph Utsler (aka Shaggy 2 Dope) and their now-retired manager, Alex Abbiss. He is also the younger brother of rapper Robert Bruce, (a.k.a. Jumpsteady). He has a son named Joseph Bruce II who was born in January 2005. He also has a daughter named Ruby

Violent J now has a radio show on W-FUCK OFF RADIO.com, called "The Witching Hours" - alongside other artists, producers, and special guests from The Dark Carnival of Psychopathic Records. Which is now over and now he has a show called "The Main Event" on Psychopathic Radio.

A recent appearance by Violent J and Shaggy 2 Dope on the incredibly popular Howard Stern Show on Sirius Satellite radio, was extremely popular and Stern told ICP (and his sizable audience) that they were one of his favorite guests, telling the Insane Clown Posse that "you are exactly what you claim to be. You are for real."

Wizard Of The Hood