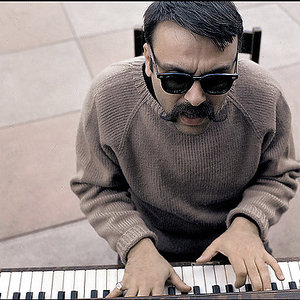 Born in San Francisco, jazz pianist Vince Guaraldi ( July 17, 1928 - Feb 6, 1976) graduated from Lincoln High School and then San Francisco State College. Guaraldi was already performing while in college in such venues as the Black Hawk and Jackson's Nook, sometimes with the Chubby Jackson/Bill Harris band, other times in combos with Sonny Criss and Bill Harris. He did minor gigs as well, such as weddings.

Guaraldi's first recorded work can be heard on "Vibratharpe," a 1953 release by the Cal Tjader Trio. In 1955, he put together his own trio: longtime friend Eddie Duran on guitar and Dean Reilly on bass--and tackled North Beach's bohemian ?hungry i? club, where his piano work became a huge attraction. It soon came to be recognized as the Guaraldi sound. The original Vince Guaraldi Trio, with Eddie Duran and Dean Reilly, can be heard on two genuinely pleasant releases: "The Vince Guaraldi Trio" (1956) and "A Flower Is a Lovesome Thing" (1957). Guaraldi toured in 1956 with Woody Herman's third Thundering Herd, replacing Nat Pierce on piano for one season.

Inspired by the 1959 French-Brazilian film Orfeu Negro (1959) (Black Orpheus) Guaraldi hit the studio with a new trio: Monty Budwig on bass, Colin Bailey on drums--and recorded his own interpretations of Antonio Carlos Jobim's haunting soundtrack music. The 1962 album was called "Jazz Impression of Black Orpheus," which was released on then-owner Saul Zaentz's Fantasy Records, and "Samba De Orpheus" was the first selection released as a single. Combing the album for a suitable B-side number, Guaraldi's producers finally made a new version of a modest original composition titled "Cast Your Fate To The Wind," which became a smash hit, and won the 1963 Grammy for Best Instrumental Jazz Composition. However, Guaraldi's greatest fame came from scoring A Charlie Brown Christmas (1965) (TV) in 1965, based on Charles M. Schulz's "Peanuts" comic strip, and he continued to score all the Peanuts television specials till his death.

On February 6, 1976, while waiting in a motel room between sets at Menlo Park's Butterfield's nightclub, Guaraldi died of a sudden heart attack at the age of 47.

It's The Great Pumpkin, Charlie Brown

The Lost Cues From The Charlie Brown Television Specials Vol. 2

The Lost Cues From The Charlie Brown Television Specials Vol. 1

With The San Francisco Boys Chorus