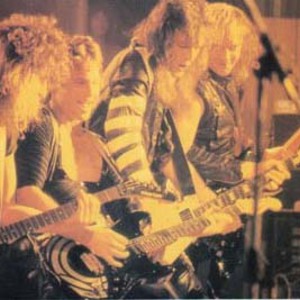 1) Victory was formed in Hanover, Germany in 1984 from the remnants of the band Fargo. Apart from bass player Peter Knorn, there were two guitarists, Tommy Newton and John Lockton, as well as drummer Bernie Van of Graaf forming the group. After they originally worked with singer Pedro Schemm - after a small interlude with the later Thunderhead shouter Ted Pullit - the singer Charlie Huhn joined, who had formerly played with Gary Moore and Ted Nugent. By recommendation of Scorpions guitarist Rudolph Schenker the band was guided by David Krebs' (of Scorpions and Aerosmith fame ) management.

2) Victory is a hardcore band from southern New Hampshire. They were formed in 2005 and played together for two years. They recorded a demo of 2 songs with most notable song being "breaker". They got a big fan base following and played shows in the boston area as well as the local new hampshire venues. They later went onto record a 5 song ep. Right after being recorded the band broke up.

It's A New Dawn

Fuel To The Fire

You Bought It -You Named It