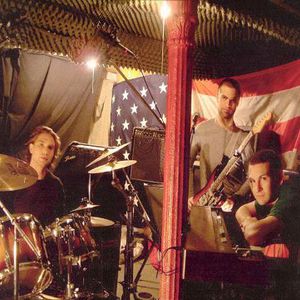 Seattle band Upwell began in 2000 with singer/guitarist Michelle Pavcovich and guitarist Steve Schneider. After struggling to find the perfect rhythm section, they ultimately teamed up with drummer Frank Barrera in 2004. Esteemed producer Jack Endino (Nirvana, Soundgarden, Mudhoney) filled in on bass for Upwell's live shows while they searched for a permanent bassist, also appearing on (and recording) their June 2005 release, ?Number Nine EP.

?? In July of 2005, Upwell finally completed their lineup by adding bassist Kirk Jamieson to the mix. With the whole unit intact, Upwell have been moving ahead with full force, and are now in the final stages of completing their next full-length release, "$ell the Sky," due out in the spring of 2008.

Deeply influenced by music of the ?70's (Doors, Beatles, Zeppelin, Cream) Upwell pulls from these roots, as well as more current influences such as Queens of the Stone Age, Sonic Youth and The Mars Volta. The end result is a fusion of tough power grooves woven with intricate and varied style nuances. ?Their sound is straight-ahead rock, but done with the finesse of people who have been honing their craft for years?? ~ Tablet Magazine, Seattle, WA. Upwell has also been described as having a sound that stays true to their region. Tacoma's Weekly Vocano wrote: ?Upwell's music has that cool Seattle sound including intense vocal harmonies and gritty guitars.?

Upwell's live performances are creating a buzz in the music community and have earned them a loyal cult following, leaving their listeners both spent and in withdrawal. They have played many of Seattle's finest clubs, including El Corazon, Neumos, and Chop Suey and The High Dive.

Upwell: To move or flow upward; to rise from an inner source.

In Through The Outro