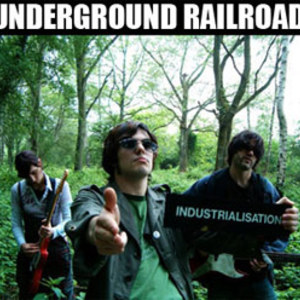 Underground Railroad ? Biography 2011 (by Jamie Fullerton) Chances are, if you're reading this biography, you've heard of London-via-the-Parisian-suburbs rockers Underground Railroad already. Possibly through the sawdust-rough demo collection ?Twisted Trees' One Little Indian put out in 2007 as an intro to the French trio to set them on their way. Maybe by catching one of the guitar-wall live shows that has earned them the reputation as one the UK capital's most joyously feral live bands, at the countless London or UK shows they've played...

Chances are, if you're reading this biography, you've heard of London-via-the-Parisian-suburbs rockers Underground Railroad already.

Possibly through the sawdust-rough demo collection ?Twisted Trees' One Little Indian put out in 2007 as an intro to the French trio to set them on their way. Maybe by catching one of the guitar-wall live shows that has earned them the reputation as one the UK capital's most joyously feral live bands, at the countless London or UK shows they've played, or maybe a support slot with Blood Red Shoes, Dinosaur Jr or Ladyhawke.

More likely though it was through 2008's 'Sticks And Stones' album, the Seattle-cut record that propelled them from rugged potential to a band who could confidently mould impeccable alt.rock influences such as Sonic Youth, Pavement et al into their own image.

Reviews glowed ? critics and tastemakers gushed and salivated, but vastly more importantly the band earned the ear-pricking of reams of new fans beguiled by their charm, tunes and unpredictability. A giant leap forward, yes, but not the peak quite yet.

Namely because 'White Night Stand', the band's third album, is finally arriving this June. 'Sticks And Stones' is viewed by most of its listeners as a revelation, but as singing drummer Raphael Mura admits: "There are a actually a couple of songs on ?Sticks And Stones' that I don't really care about much. But on this one, it's the first time I've loved all of the songs."

The 'this one' Raphael alludes to is the album that finally strikes the keynote of what Underground Railroad are about. Across its 11 songs, produced in London's Stamford Hill a stone's throw from their flats by the band themselves in order to perfectly encapsulate the sounds in their heads that no producer could, guitars explore and meander all the while circling the biggest melodies of the band's career so far.

It's intense and amped, touching and subtle at points and hugely tuneful, taking in early Radiohead and Liars as well as the beloved American alt.rock bands that made the three fall in love with music in the first place.

That 'first place' was back in June 2002 in the Parisian suburb of Saint Quentin, where Marion, Raphael and JB, outsiders due to their lack of interest in the reggae and metal that dominated the tastes of their peers, began practicing together in the woods (Raphael: "Because in the summer none of the halls and things are open").

With tastes honed from loaning out Sonic Youth, Nick Cave and Velvet Underground, Iggy and Bowie CDs from their local library, they gigged and gigged wherever anybody local would have them, eventually their hustling drummer bagging a series of UK gigs simply through email persistence.

They weren't quite the packed-room success stories of rock legend ? they found out their Leicester show was cancelled after they'd crossed the channel and seen the cancellation sign on the venue door ? but they had tasted blood. In 2005 they took the plunge and moved to east London, frustrated at growing too big for their dainty suburban lifestyles and wanting a taste of the British indie rock scene they adored.

Wise move. After honing their craft slog-gigging in the capital, they were spotted by the One Little Indian label chiefs, who made plans to release their demo collection Twisted Trees, completely unchanged from the recordings the band had made themselves. The record earned them a devoted underground following thrilled with its unhinged, thrillingly clattery style. Playing gigs as often as they had hot meals (about twice a week), a year later they were ready for the step up.

Flying to Seattle to make 'Sticks And Stones' with producer John Goodmanson (Bikini Kill, Death Cab For Cutie, Los Campesinos!, Hot Hot Heat), Underground Railroad's debut album proper elevated them to the level of the UK scene's most sophisticated yet hard-rocking bands. A period of intense touring began as demand for them shot high, and inevitably, there was burnout.

However, always a band that thrives on intensity, the burnout proved inspirational. Listening to Radiohead, The Flaming Lips and Autolux, writing alone and communicating via email, Raphael and Marion honed their darkest material yet, taking in the tone of their van-crushing touring schedule and the night-time adventures and individuals their London lifestyles was providing.

Sessions started in January 2010 in their practice room in Stamford Hill with engineer Ellis Gardiner, and after an initial purple patch yielded finished songs that would end up making the final record, they soon realized that they should go no further than their own doorstep to make the album most true to themselves.

"The American sound is on 'Sticks And Stones', Raphael outlines, "the overdubbing vocals and guitars, big drums, big bass? after three months there I was even saying 'Hey maaan' to everyone. This time we just felt like we were a London band, so we wanted to do it in London. This record, it sounds more UK."

Indeed, as the songs' subject matter dictated, 'White Night Stand' is more of a London album than any born and bred capital-dwellers could have hoped to make, their outsider status offering them a detached insight into the city's inner workings. Raphael: "I was writing about all these dark bars in London, the weirdness of meeting new people and not understanding someone, or how they function. It's a night-time album, definitely."

For Marion: "My lyrics are all about stories that happen at night, insomnia, wild parties, darkness and confusion, one night stands. The title of the album is a "white night" in French, "nuit blanche" that means when you spend the whole night awake ? you can't or won't sleep."

There are moments of fitting intensity. Most notably 'Seagull Attack', the album's crescendo centrepiece, that clocks in at over nine minutes with its hypnotic repetitive guitar cascade ? a boundary-shoving moment for the band. "I wanted to make it ten minutes long?", Marion mutters, with Raphael revealing Liars' work on their debut album They Threw Us All In A Trench And Stuck A Monument On Top' as part of its inspiration.

Then there's the distinctly Radiohead-esque 'Ginkgo Biloba', another album highlight, with Raphael happy to acknowledge the influence of Thom Yorke and co. "Some people have told me that's really Radiohead-y, which I take as a compliment," he laughs. "I never like to be compared to bands, like, 'That's really Sonic Youth, that's really Radiohead?', but there are a few more electronics and I know Radiohead do actually use that guitar tuning!"

Further inspiration across the album came from Twin Peaks and David Lynch ? Marion naming 'The Black Widow', 'The Orchid's Curse', 'Traces To Nowhere', and 'Rude Awakening' after episodes of the show, and 'Yellow Suit' in reference to his 'Blue Velvet' film. "I just always feel inspired by its ambience," she explains. Raphael elaborates: "The music is a bit more cinematic. The cello [provided by musician Anna Scott, who wrote new cello parts for the album herself and joins the band live regularly], it sounds like you could put it in a David Lynch film where someone's driving on a lost highway, dark, at night."

Dark, intense, melodic, exploratory, fun? Underground Railroad have gone around the world then found what's most true to them back where they now call home. It's an intriguing place ? we suggest you have a listen to what it sounds like.

The Origin of Consciousness