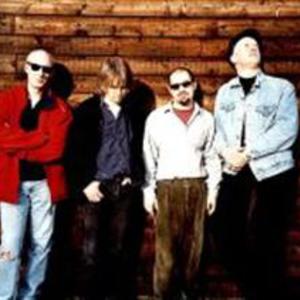 The term progressive rock just won't do. Not when you're discussing the bombastic, purifying, spiritual, cathedral-ceilinged enigma that is California's UNDER THE SUN. Band sage Chris Shryack can wade into the name game with ease, but that's as far as he will go. Can something this large and panoramic be called progressive rock, or even neo-prog? Likely not. Chris amusingly thinks about it for an instance, and decides that he likes the term "cinematic symphonic art rock!"

Perhaps a good touchstone. But UNDER THE SUN is so much more. Having formed ten years ago, the band's self-titled debut is likely the most shamelessly textured, unabashedly spiritual and unapologetically intellectual art rock record since The Yes Album. And above the fray, through the rock, and under the sun, the band codifies and gold-plates the display within songs that are often immediate, accessible, not too lengthy, and expertly laden with driven power chords. Comparisons with any era of RUSH really won't fly here. Think early YES, early GENESIS, German prog from the '70s, DREAM THEATER riffing, and perhaps brainiac songwriting from the likes of Peter Hammill or Roy Harper.

The acrobatic rhythm team of Paul Shkut on drums and Kurt Barabas on bass propel each song limitlessly. Almost everything on the record, whether "violent" or simply panoramic and cleansing, benefits from their energy and chops. Matt Evidon's keyboard work is an integral part of the band's famous high science texturing, while Chris provides a second tsunami of tones and tunes built from a vast guitar vocabulary. Finally, you've got Chris' elegant and almost surreal vocal work, which, oddly, sound like Chris Squire crossed with a technically trained version of Ozzy Osbourne, something perhaps prophesized by the band's name, Under The Sun, which is also the name of a bruising old BLACK SABBATH song.