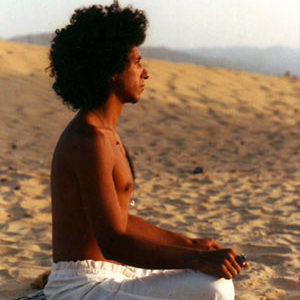 Born and raised in Paris, France, Ariel started playing the recorder at age 9 and saxophone at 15. During his successive studies of Electronics, Computer Science, Music and Art in Paris, Ariel performed with several bands, then toured the world and visited Europe, Japan, India, Eastern Canada, and parts of the USA. Apart from rhythm & blues, pop and jazz, he acquired assorted experiences in middle-age French, electro-acoustic, and modal music.

All the travels broadened Ariel's musical horizons tremendously; listening to and playing with different styles, people, and instruments, intricate scales, techniques, timing and rhythms.
After learning circular breathing from a snake charmer in India, Ariel practiced it on soprano sax - for many sleepless nights - in the basement of a cathedral in New York (when he was not playing upstairs on the large harmonium). Returning to France in late ?76, Ariel could include those endless notes into his own long-delay-effect system with which he toured, playing solo concerts. Ariel contributed to the birth of (then) new music genres: minimalist, space, ambient, new age, electronic etc.
With his passion for recording and sound, Ariel always had a home studio and was also technical assistant to some of the composers at Paris' GRM ? Musical Research Group part of the INA (Audiovisual National Institute), where he recorded some of his compositions.
Over 3 decades, Ariel Kalma published several vinyl LP's, cassettes, and CD's, many older ones out of print. His compositions have been used for modern dance-theatre, films, musical poetry, guided meditations, transformational groups. Ariel Kalma has also played on many albums in France - even throughout Europe, the US and recently Australia, where he lives.
In the year 2000 Ariel created his own world-fusion compilation label: Music Mosaic, www.music-mosaic.com

Ariel Kalma's magical and weird Osmose originally released in 1978 masterfully matches Richard Tinti's rainforest field recordings with Ariel's left field minimalist compositional ideas. Rather than simply relying on the rainforest sounds providing a pleasant backdrop to the drones, the drones interplay with the pitches of the natural sounds to create melancholic, Popol Vuh like grandeurs. The natural chirps and creaks blend with the music to become similar to ambient loops themselves; such that their very tonal nature shifts from being recognizable jungle sounds, frequently phasing into blurred rhythmic elements under the electronic parts. Ariel's musical minimalism avoids being serialist or academic, despite being part of the INA GRM studios for many years. So, neither is it concrete like Parmeggiani or Risset, nor is it classical like Philip Glass or Michael Nyman. If anything, Ariel's music is deeply cosmic, sometimes even a bit psych, ala the great Krauts of yore: old Tangerine Dream, Sand, Cluster etc. His cathedral like tones and running counterpoints actually give the rainforest noise a sinister edge. The music absolutely subverts the traditional idea of the rainforest as that of a happy hunting ground for cause riddled yuppies with Benzes full of Kruggerrands. Osmose reminds that not only is the rainforest a place of awe inspiring beauty, but it is also something very dense and alien. It is a place of removal; it is a place of isolation; it is a kind of inner space; it is an extraordinary and surreal church of sorts; and it is deadly. The album has a progression that's almost a story in toto, where the next rise is finally crossed revealing the huge, seemingly impenetrable expanse of lush greens. The expanse is then explored with wide eyed wonder until the guide dies and the companions start succumbing to fever, ague, snakes and unseen primitives at home in the shadows. Appended by 3 previously unreleased tracks from the same sessions, this reissue finally allows the rainforest to live up to its natural state of untamed jungle.