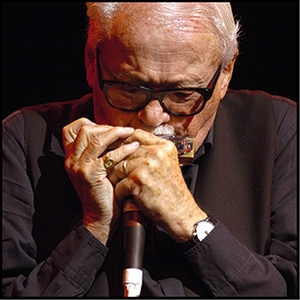 Jean-Baptiste Fr?d?ric Isidor, Baron Thielemans (born Brussels, Belgium, April 29, 1922), known as Toots Thielemans, is a Belgian jazz artist well known for his guitar, harmonica playing, and also for his highly accomplished professional whistling. He is often credited by jazz aficionados and jazz critics as being among the greatest jazz harmonica players of the century. Thielemans started his career as a guitar player. In 1949 he joined a jam session in Paris with Sidney Bechet, Charlie Parker, Miles Davis, Max Roach and others. In 1951 he went on tour with Bobbejaan Schoepen.

Thielemans started his career as a guitar player. In 1949 he joined a jam session in Paris with Sidney Bechet, Charlie Parker, Miles Davis, Max Roach and others. In 1951 he went on tour with Bobbejaan Schoepen.

He moved to the United States in 1952 where he was a member of Charlie Parker's All-Stars. He played and recorded with names like Ella Fitzgerald, The George Shearing Quintet, Quincy Jones, Bill Evans, Paul Simon, Billy Joel, Astrud Gilberto, Elis Regina and others.

A jazz standard by Toots Thielemans is "Bluesette" where he used whistling and guitar in unison. Bluesette became a major 1962 world-wide hit for him and this still much beloved and requested piece has been re-recorded by him and commercially released on records/CDs many times over both in various studio versions and live on-stage performances performed in several different countries. His trademark harmonica playing can also be heard in movie scores such as Breakfast at Tiffany's (where his plaintive "Moon River" solo in the opening scene brilliantly establishes the film's mood of romance noir), Midnight Cowboy, Bagdad Caf?, French Kiss, and in various TV programs like Sesame Street, the Belgian TV series Witse and the Dutch TV series Baantjer. His professional whistling and harmonica playing can be heard on Old Spice radio and TV commercials that have been made over the years. In 1983 he contributed to Billy Joel's album An Innocent Man, and his trademark harmonica can be heard on "Leave a Tender Moment Alone."

In the 90s Thielemans embarked on theme projects that included world music. In 1998 he released the a French flavoured album titled "Chez Toots" that included the Les Moulins De Mon Coeur (The Windmills of My Heart) featuring guest singer Johnny Mathis. This CD continues to sell well.

Today Jean "Toots" Thielemans remains a strong favorite among jazz aficionados and professional critics alike. His music CDs continue to delight (many of which were recorded in the 2000s) and have introduced him to entire new generations of keen fans.
Apart from his popularity as an accomplished musician, he is well liked for his modesty and kind demeanor. In his native Belgium, he is also popular for describing himself as a Brussels "ket", which means "street kid" in old Brussels slang. He received a joint honorary doctorate from the Vrije Universiteit Brussel and the Universit? Libre de Bruxelles (Belgium) and in 2001 Thielemans was ennobled a baron by King Albert II of Belgium.
In 2005 he was nominated for the title of De Grootste Belg (The Greatest Belgian). In the Flemish version he ended 20th place, in the Walloon version he ended 44th place.

Thielemans may have had a significant impact on The Beatles, (John Lennon in particular), during the group's pre-fame formative years. When performing in a 1959 Hamburg Germany with the pre-fame Beatles, John Lennon (sometimes with fellow Beatle George Harrison in tow) would often go over to the club where Toots was performing (at a noontime venue) as a member of The George Shearing Quintet. Lennon evidently was taken with Toot's harmonica playing and also for the guitar Toots was playing, an electric American made Rickenbacker with a short play neck. Based on the sound Lennon heard, he decided to purchase a natural alder wood "alderglo" colored three pickup Rickenbacker 1958 model 325 Capri guitar with a short scale as former Beatle and friend, George Harrison would recall to various interviewers many years later. (This iconic famous guitar often fondly referred to as the "Holy Grail" of all guitars, which was customized and tinkered with many times over the years by Lennon including being re-painted to jetglo black in September 1962, is the very same guitar that he played on The Beatles first and third appearance on The Ed Sullivan Show during February 1964).

Toots Thielemans The Best Of CD2

Toots Thielemans The Best Of CD1

One More For The Road

Hard To Say Goodbye: The Very Best Of Toots Thielemans