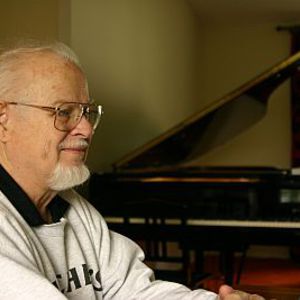 Clare Fischer (22 October 1928 ? 26 January 2012) was an American keyboardist, composer, arranger, and bandleader. After graduating from Michigan State University, he became the pianist and arranger for the vocal group The Hi-Lo's in the late 1950s. Fischer went on to work with Dizzy Gillespie and Donald Byrd, and became known for his Latin and bossa nova recordings in the 1960s. He composed the jazz standard, "Pensativa".

A veteran studio musician and a composer of rare quality, Fischer began his studies in Grand Rapids, Michigan, at South High School with director of music, Glenn Litton. After receiving his master's degree in composition from Michigan State University, where he studied with Dr. H. Owen Reed, he traveled extensively with "The Hi-Lo's" as pianist-conductor for 5 years. About the same time, his musical ascension began with his critically acclaimed arrangements for Dizzy Gillespie's "A Portrait of Duke Ellington." Fischer's influences, absorbed along the way, are as distinct as his music: Stravinsky and Shostakovich, Bartok and Berg, Dutilleux, boogie-woogie pianist Meade Lux Lewis, Nat "King" Cole, Duke Ellington, Bud Powell and early Lee Konitz - Fischer's self-expression knows no boundaries.