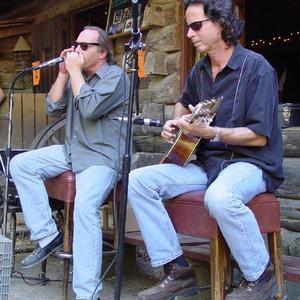 Tom and Kenny have been bringing their unique blend of guitar and harmonica blues, rags and good time music to widely diverse audiences for more than 25 years. Their live performances include concerts, clubs and festivals all over the world, and they were the only musical act in America to play all four venues of the 1984 Olympic Games. Together and separately they have worked on countless film scores, TV soundtracks, commercials and sessions.

Together and separately they have worked on countless film scores, TV soundtracks, commercials and sessions. They've appeared on television internationally, were featured on the "Levi's 501 Blues" commercials, have played for audiences of 300 million via Voice of America and are frequent guests of National Public Radio. Their eight duo albums have garnered much critical acclaim throughout the world, and their music from the film "Over The Edge" won the duo the prestigious Telly Award in 1994.

At home wherever they go, Tom and Kenny fit in at blues, folk, bluegrass and jazz festivals, and their extensive teaching backgrounds make them a natural choice for college campuses or venues which feature workshops. Because their music is a blend of American roots styles, they are regulars overseas, drawing rave reviews wherever they go.