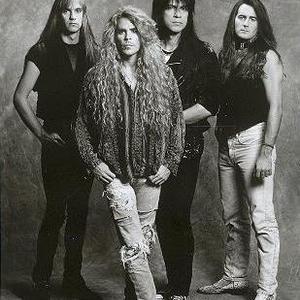 There are at least 10 artists called TNT. 1) TNT is a heavy metal band formed in Trondheim, Norway in 1982, by vocalist and rhythm guitarist Dag Ingebrigtsen , guitarist Ronni L? Tekr? , bassist Steinar Eikum and drummer Morten "Diesel" Dahl . They released their self-titled debut album the same year ? their only album that features Norwegian lyrics ? and got a hit with the single "Harley Davidson".

1) TNT is a heavy metal band formed in Trondheim, Norway in 1982, by vocalist and rhythm guitarist Dag Ingebrigtsen , guitarist Ronni L? Tekr? , bassist Steinar Eikum and drummer Morten "Diesel" Dahl . They released their self-titled debut album the same year ? their only album that features Norwegian lyrics ? and got a hit with the single "Harley Davidson". In August 1983 Morty Black replaced Steinar Eikum on bass, and the following year American vocalist Tony Harnell became TNT's new frontman, making his debut on their album Knights of the New Thunder with the temporary stage name Tony Hansen. That line-up recorded one more album, Tell No Tales in 1987, before "Diesel" Dahl decided to quit one year later, after some turbulent times within the band. Tell No Tales - as co-written by Dahl - produced TNT's biggest hit, the single "10,000 Lovers (In One)".

Kenneth Odiin became TNT's new drummer, but recorded only one album with the band, Intuition in 1989, before he left. His replacement was John Macaluso, who played on the albums "Realized Fantasies" and "Three Nights in Tokyo" (both released in 1992). The same year they decided to take a break, choosing to focus on various solo projects. In 1996 the compilation "Till Next Time" was released, and Harnell, L? Tekr? and Black reformed TNT with drummer Frode Hansen. That line-up recorded two albums, Firefly in 1997 and Transistor in 1999.

In 2000 Morten "Diesel" Dahl came back to TNT, 12 years after he left. The band started working on their new album "My Religion", which was released in 2004. Months after the album release, Morty Black decided to quit, and Sid Ringsby took his place for the following concerts.

TNT's new studio album, All The Way To The Sun was released in the fall of 2005. A single, "Sometimes" was released on July 25th, but was only available in Norway. The same year Victor Borge replaced Sid Ringsby as their live bassist.

Tony Harnell left the band in April 2006 for both personal and professional reasons, although he is collaborating with iMagic Films and producer Darren Paltrowitz on a live DVD featuring his performance with the band in Madrid, Spain from April 1, 2006. The DVD is intended to be released in Japan in August 2006 and elsewhere in the world in September 2006.

TNT are still alive and kickin' - and are proud to introduce the new man behind the mic: Singer Tony Mills from Birmingham, England. Tony is one of Europe's most respected hard rock singers, mostly known for his work with UK Melodic Rock act Shy and his solo artiste releases of recent years. Tony has worked along side such names as Cinderella, Dokken, Cozy Powell, Meatloaf, The Sweet and many more and will add a new and exciting dimension to TNT as the band enter a new era. It is an unbelievable coincidence that Mills' band Shy were already booked to support TNT at the Polar Festival on June 30 in Storsteinnes, Norway before Harnell's departure. This concert for TNT will be fronted by the ex-vocalist Tony Harnell as a farewell show for him.

2) TNT was a grindcore band from Kranj, Slovenia.

3) TNT is a rock band from Porto Alegre, Brazil. Theiy first appeared on the compilation "Rock Grande do Sul" in 1986, recorded along with four other local bands, and recorded their self-titled debut album in 1987, achievieng national success and gaining a strong local follow. The band went through varios formations, but the most known members were M?rcio Petracco, Luis Henrique Tch? Gomes, Nei Van S&oacute;ria and Flavio Basso - the last two of them disbanded early and went on to form another classic local rock band named the Cascavelletes.

The cult that was created around these two groups originated what is now called "Rock ga?cho", 'ga?cho' being the noun for inhabitants of Rio Grande do Sul, and is still a strong influence for today's groups like Faichecleres, Identidade or Sapatos Bicolores.

4) TNT is a Romanian pop/dance band.

5) TNT is a hardstyle act, a collaboration between Technoboy and Tuneboy. TNT stands for "Technoboy 'N' Tuneboy".

6) TNT is a Hungarian pop (in the beginning Hip-Hop) band.

7) TNT is a project of Tadd Mullinix and Todd Osborn (better known as Dabrye and Soundmurderer) centered around the Roland TB-303.

8) TNT was a swiss punk band from Z?rich, founded in 1978 they where active until the end of the 80s. There most famous hit was "Z?ri br?nnt" (Z?richs burning).

9) TNT was a NWOBHM band who released a single ("Back on the road/Rockin' the night") on Neat Records in 1984.

10) TNT was a rock band based in Bradford, created at it's University which were active between 2006 and 2009. The band released a charity single called 'Scream Out' in May 2007 and recorded an EP in 2009 called 'Cleaning Your Mega Hate Scream' streaming on the band's Myspace. The band disbanded in August 2009 after each group member went their separate ways.

Live In Concert With Trondheim

A Farewell To Arms

All The Way To The Sun