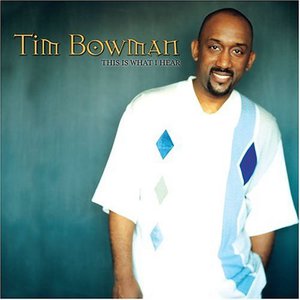 Bowman was born on April 22, 1959, in Detroit, Michigan, the ninth of a dozen children born to the late Aaron (a brick mason) and Mattie Bowman, a housewife. The family's life revolved around the International Gospel Center Church in Ecorse, Michigan. Bowman was first inspired to pick up a guitar in 1970, at age 11, by a church guitrist "who just blew me away." By the age of 15, Bowman was seriously hooked, but experiencing growing pains as he taught himself. His guitar influences vacillated between Roy Clark and George Benson.

"I was having the hardest time getting the feel of the guitar and getting comfortable with it. So, I told my pastor and he prayed for me and I started getting the hang of it." From that point on, Bowman played in church for eight years and won a two-year scholarship to the Detroit Music School. "Those were two of the most enlightening years of my life." After high school, Bowman held on to a General Motors assembly line job for a few months, but, after being laid off, Bowman devoted his time to playing his instrument, eventually landing a spot with the renowned gospel group, The Winans. Bowman stayed with the group as guitarist and, eventually, music director for six years.

Although it was a tremendous opportunity, Bowman wanted to get off the merry-go-round. "I was getting burned out from the traveling and I missed spending time with my wife and kids." Bowman left the group amicably in 1987 and took a hiatus from playing. He settled into domestic life and was content to play the guitar as a hobby until his wife, Wanda, influenced him to do an album.

Although the idea of an album had never occurred to Bowman, he thought it was a good idea; thus, began his latest music career. In May, 1996, Bowman printed 2,000 copies of his first album and started promoting it around Detroit. The city's jazz radio station, WJZZ, started playing four tracks concurrently ("Give Me You," "Love,Joy, Peace," "I'll Be There," and "Speak To Me") in heavy rotation. A consignment of 1,000 CDs in Detroit record stores sold out in five weeks. Eventually, Insync Records picked up the CD and released it nationally. In the spring of 1997, the album peaked at 19 on the Gavin smooth jazz Charts and 20 on Radio & Record Magazine's album chart. The single "I'll Be There" rose to 18 on Gavin's Top Twenty singles chart.

Bowman's follow-up projects. "Paradise" and "Smile," also received widespread media attention and great reviews. In 2004, Bowman released his fourth collection, "This Is What I Hear." With it, Bowman surpassed the success of all his prior albums with his smash #1 single, "Summer Groove." The acclaim for "This is What I Hear" helped Bowman land a spot on the '07 "Guitars and Saxes Tour", alongside Jeff Golub, Gerald Albright, and Kirk Whalum.

Bowman's next release was a self-titled CD in early 2009. It was Bowman's first for Trippin' N Rhythm. When Bowman was asked what he thought about the new collection, Bowman said, "I feel good about this one. It's the feeling I get every time I know I've had fun making an album." Smooth Jazz friends like Jeff Lorber, saxophonist Najee, Kirk Whalum, Jeff Lorber, Randy Scott, and Darren Rahn all show up on the record. Of the collaborations, Bowman says, "I am so blessed to have some of the best musicians in the world on this record." Bowman's son, Tim Bowman Jr., is also featured on the R&B song, "All I Need Is You."

This Is What I Hear