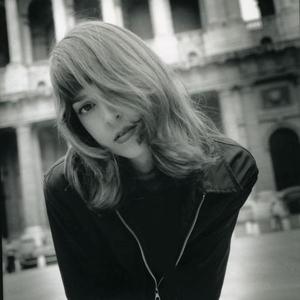 April March (real name Elinor Blake) is an indie pop singer from California. She was born on April 20, 1965 and sings in English and French. Her best known composition is an English language remake of Serge Gainsbourg's "Laisse tomber les filles" released in 1998 as "Chick Habit". The song appears during the opening credits of the 1999 film "But I'm A Cheerleader" and the end credits of Quentin Tarantino's 2007 film "Death Proof", the latter alongside her cover of the original song.

She has had one of the more interesting dual careers, as a cartoon animator (including a stint as a principal animator for the Ren & Stimpy show) and as an indie pop singer/songwriter, more popular in France than in Brooklyn, where she was raised, or in her current home of California.

As a child, Elinor became fascinated with France, and jumped at the opportunity to participate in an exchange program in France in junior high. Today, her albums tend to contain songs in both English and French, which draw heavily on themes and styles from French 1960s pop music.

Beginning in the early 1980s, she worked as an animator for Archie Comics and Pee Wee's Playhouse; in 1986 we see her working on the Madonna feature Who's That Girl, animating the star in the title sequence and the contemporaneous music video. Her first band, The Pussywillows, was formed in 1987, although their existence was interrupted for a year while April March attended the one-year Disney Character Animation program in California. In 1991, the Pussywillows broke up, and Blake formed the Shitbirds, which lasted until 1995. Since then, March has recorded as a solo artist, and has appeared on some motion picture soundtracks, as well as the Cartoon Network series I Am Weasel theme song. Most notable is her remake of Laisse tomber les filles into Chick Habit that was featured in the 1999 campy teen comedy 'But I'm a Cheerleader' and Quentin Tarantino's Death Proof. Her appeal in the United States has grown with her recent and ongoing collaborations with Jonathan Richman, Los Cincos and the Dust Brothers, and in France with her collaborations with Bertrand Burgalat.