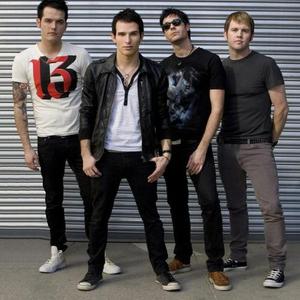 The members of The White Tie Affair have musical A.D.D. Every thing they hear, touch and see influences them. The White Tie Affair is an adventure into pop, exploring many different styles and sounds. Whether it be sung, strummed, or programmed, you can bet they have tried to make it work. Front man Chris Wallace explains that the goal of the band is to "communicate their love for different kinds of music to anyone who wants to listen."

Growing up in Chicago, the group started piecing together sounds - everything from Stevie Wonder to AFI to The Police and came up with original, catchy songs. The White Tie Affair finally unveiled their musical work, playing shows all over Chicago. Their home city continues to greet them with open arms as the band has sold out the Beat Kitchen and has been main support for Lucky Boys Confusion at the annual reunion show at the Metro.

It only took a couple of months before Slightly Dangerous/Epic Records took notice and the band signed a deal in 2007. Since then, The White Tie Affair has toured extensively across the country, playing over 250 shows, garnering press and die-hard fans alike. "We are living the life we always heard rock bands talk about when they were starting out ? the band in a van, playing great venues in a different town every night," says guitarist Sean P. "This is the life we always wanted."

The White Tie Affair have also forged a partnership with Playboy Enterprises. After playing the Playboy Pajama Party in summer 2008, The White Tie Affair were photographed by Mick Rock for the November 2008 "Fashion" issue of Playboy Magazine, played a number of Playboy's Vegas parties, and are headlined Playboy's College Tour.

MTV has said, "since we first started listening to them, The White Tie Affair went from small-time gigs to big-time tours and from YouTube stars to TRL heroes. And they've gracefully braved grandiose comparisons to hometown heroes Fall Out Boy (though the Killers come to mind, and Boys Like Girls fans, you also need to pay attention), though they're carving out their own niche with glammed-up, synthed-out dance-rock tracks like "Candle (Sick and Tired)" and "Allow Me to Introduce Myself, Mr. Right" faster than you can swill champagne out of the bottle."

The White Tie Affair have garnered a huge fan base in a short period of time and continue to impress. Their video for "Candle (Sick and Tired) premiered on MySpace with 100,000 views in less than 3 days, they are embarking on a US tour with Lady Gaga, and are one of Warped Tour Kevin Lyman's favorite bands for this summer's Vans Warped Tour.

"At the end of the day, if our music makes you smile or dance or sing in some way, then we are accomplishing our goals. We want be the soundtrack to your great days." - Chris Wallace