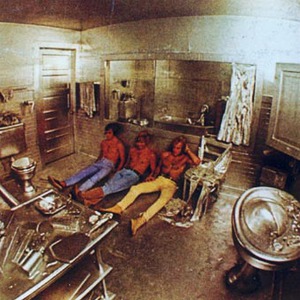 There are few groups as enigmatic, as mysterious as The West Coast Pop Art Experimental Band. The prime mover in the band was Bob Markley, born in Oklahoma and the son of an oil tycoon. He moved to Los Angeles early in the 1960's, and in late 1961 he began his recording career with "It Should Have Been Me" / 'Summer's Comin' On", released on Warner Bros. Both sides were pure teen doo-wop, giving little indication of what would follow.

Markley remained involved in music, and three years later he met up with two brothers, Shaun and Danny Harris, whose interest in music seemed inevitable as their father was a renowned classical composer and their mother a concert pianist. In 1964 Shaun and Danny formed a group The Snowmen, with two musicians who would go on to form The Sunrays and score 1967 hits with 'Andrea' and 'I Live For The Sun'. Later, with the group now split, Shaun and Danny were studying at the Hollywood Professional School where they met Michael Lloyd, leader of yet another local band, Laughing Wind, who had cut some tracks for Tower Records. With Bob Markley and John Ware, a friend of the family, they started a new group. In 1966 the line-up was Dan Harris (lead guitar), Shaun Harris (bass), Michael Lloyd (guitar), John Ware (drums), and Bob Markley who became the inspirator of the band. They band played around all the Sunset Strip clubs and, quoting Ware, "every freakout that ever happened at the Hollywood Palladium".

By 1966 the band had signed to Reprise and their debut album, 'Part One', included some daring cover versions of such L.A. contemporaries as Van Dyke Parks, Frank Zappa and P.F. Sloan. The album opened with one of its strongest cuts, the marvelous 'Shifting Sands'. Here is all that was good about the early WCPAEB, that mixture of understatement and melody, with exceptional guitar work that flew over the top of the song, creating an atmosphere that was itself unique. It's the style that the group would expand on. The album-sleeve was a colored collage of anonymous photographs, with no personnel listed. It is not clear who actually played on the album, although Bob Markley is listed as the co-producer.

With the release of the group's second album 'Vol 2', Markley's hold on the group was obviously completed and the air of anonymity removed. The WCPAEB was clearly seen as a trio, with photographs on both the front and back sleeves. Alongside Markley were the Harris brothers. The album included some gems. "Smell of Incense" is particularly good with some strong instrumentation. Released as a single (in a cut-up and remix version), it was the hit the group never had; They were curiously beaten by a cover version by the Southwest F.O.B., who reached number 56 a few months later.

The third album 'A Child's Guide to Good and Evil' appeared in mid 1968 and was the group's most accomplished collection. Still operating as a trio the band now found themselves with a new depth of sound, better able to shape their ideas. This was fully explored in "Eighteen is Over The Hill", where by using layers of multi-track, there was now a fuller wash of harmonies and instruments to complement the often-complex material.

Another confused period followed after the group was dropped by Reprise, as their sales were falling. Bob Markley took out some time to work as producer on other projects.
The WCPAEB did, however, re-appear, and a further album 'Where's My Daddy' was released on Amos Records late in 1969, although not of the same class as the Reprise material. Once again the line-up was made up of the crucial three.
This album effectively ended the name of the West Coast Pop Art Experimental Band, although some time later the trio resurfaced together for one last project, a Bob Markley solo album.

A Child's Guide To Good And Evil