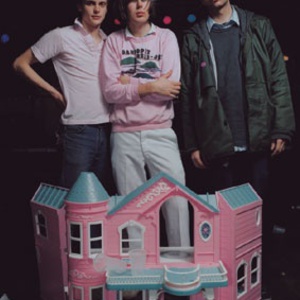 The Montreal-based Unicorns were originally formed in December 2000 by Nicholas Thorburn (stage name Nick "Neil" Diamonds, as well as a host of other aliases) and Alden Penner (stage name, Alden Ginger; Elvis Presley's fianc?e when he died was Ginger Alden). They were later joined by drummer Jamie Thompson (stage name J'aime Tambeur) and Max Groadie ("the American Roadie, n? Bill Horwood"). The band self-released their debut album Unicorns Are People Too in March 2003 through their own record label Caterpillars of the Community, with a limited press run of 500 copies.

The band self-released their debut album Unicorns Are People Too in March 2003 through their own record label Caterpillars of the Community, with a limited press run of 500 copies.

In October of the same year they went back into the studio, recording several new songs as well as reworking a number of songs from their debut. The resulting second album, Who Will Cut Our Hair When We're Gone?, was released in November 2003 on the label Alien8 Recordings, and was a notable departure for a label that has traditionally released albums by avantgarde and highly experimental artists such as Acid Mothers Temple and noise pioneer Merzbow.

The album received glowing reviews from The Village Voice, NME, online magazine Pitchfork and numerous other publications around the world, and it quickly earned the band a fanatical following on the indie-rock circuit. The band toured constantly for 13 months following its release, initially supporting fellow Canadian band Hot Hot Heat across North America before proceeding to play to sell-out crowds in Australia, Europe and the UK, as well as touring several more times across the US and Canada.

The band's hectic touring schedule took its toll, however, and by the time of their Australian tour in December 2004 they were showing signs of exhaustion, playing reportedly lukewarm shows and verbally clashing with audience members. On December 28, 2004, a short message appeared on the Unicorns' website reading "THE UNICORNS ARE DEAD, (R.I.P.)," leading fans to speculate as to whether they had broken up. In early February of 2005 pitchforkmedia.com reported that The Unicorns had split. Also the website solidpr.com issued a press statement on the band's behalf confirming the claims of break-up.

Thorburn and Thompson continue to collaborate together as Th' Corn Gangg (a pop/hip-hop project) and Islands (a pop project).

Penner released a 7" on the Melbourne-based Art School Dropout label. The a-side, "The Ghost Of Creaky Crater", was recorded in Melbourne on December 19, 2004 while The Unicorns were touring the country. The release was limited to 100 copies. Penner now performs under the name Dub Intefadah.

Who Will Cut Our Hair When We're Gone? (Remastered)

Unicorns Are People Too

Who Will Cut Our Hair When We're Gone?