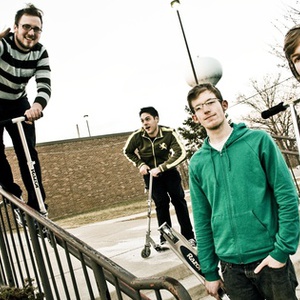 The Swellers are a punk quartet from Fenton, Michigan, formed in 2002. Their music is fast and melodic, drawing heavy influences from 1990s skate punk. The current lineup consists of Nick Diener (guitar & lead vocals), Jonathan Diener (drums & backing vocals), Ryan Collins (guitar) and Anto Boros (bass). They were previously signed to Fueled By Ramen, but announced that they have left the label on April 20, 2012. They plan on joining a new label by 2013.

The band played on the Vans Warped Tour in 2005 and had a short tour in Japan following the Japanese release of The Beginning of the End Again.

Since then the band has been touring nonstop around the U.S. and Canada with bands like Less Than Jake, Streetlight Manifesto, A Wilhelm Scream, Polar Bear Club, Crime In Stereo, Set Your Goals, Four Year Strong, Broadway Calls, Living With Lions and Fireworks.

The Swellers recently completed a tour as an opening act for The Early November. During the tour they also played along with The Wonder Years and Young Statues.

The Light Under Closed Doors

Running Out Of Places To Go (EP)

Beginning Of The End Again