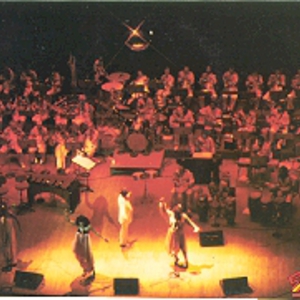 The Salsoul Orchestra was formed in 1974 in New York City, U.S.A. It was disbanded in 1982. The Salsoul Orchestra was the 'house orchestra' of Salsoul Records. It was mainly Vincent Montana, Jr. who wrote, conducted and produced the orchestra. The orchestra routinely included up to fifty members (including up to 18 violinists). Apart from it's own recordings, it played for numerous groups and artist on the Salsoul label. Montana got his start doing sessions for philly soul producers, and he adapted that lush style to disco, adding Latin motifs and textures.

Though Salsoul records had long been out of print, several were brought back in the mid-'90's. Many of the more recent 'house' music offerings owe more than a passing nod to the recordings of this orchestra.

Heat It Up (Expanded Edition)

Up The Yellow Brick Road (Vinyl)