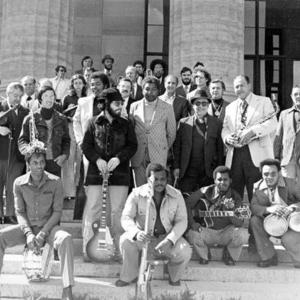 Originally the backing band for Cliff Nobles & Co., MFSB (short for "Mother, Father, Sister, Brother", although schoolyard rumours would have had this stand for "Mother Fucking Son of a Bitch" or, in Northern Soul circles in England it stood for "Music For Soul Brothers") were a loose conglomeration of studio musicians who provided backing tracks for dozens of seminal Philadelphia soul recordings in the 1970s, and later released successful songs and albums as a standalone recording act.

Assembled by the production team of Gamble & Huff, MFSB was the house band for their Philadelphia International Records label and provided the signature smooth Philadelphia sound for many acts including the O'Jays, The Spinners and Harold Melvin & the Blue Notes.

In 1974, Philadelphia International released an instrumental track which had been recorded by the band as the theme for the television show Soul Train as a single. The record, titled "TSOP (The Sound of Philadelphia)", featuring The Three Degrees, was a hit on both the pop and R&B charts, and launched a recording career for the band under their own name. MFSB albums and singles were released for the rest of the decade, and their material later served as ample material for sampling by hip-hop musicians.

Another popular MFSB number, "Love Is the Message", has been a favorite of dance/disco DJs since its release; countless remixes, both official and unofficial, exist of the song. On September 20, 2004 the record became among the first to be inducted into the newly formed Dance Music Hall of Fame. The song has also enjoyed a boost of popularity since it was featured on the in-game soundtrack of the 2004 video game Grand Theft Auto: San Andreas. It was not released on the official boxset with the game, however.

The Love Is The Message: The Best Of MFSB

Mysteries Of The World (Vinyl)

End Of Phase I: A Collection Of Greatest Hits (Vinyl)

Love Is The Message (Vinyl)