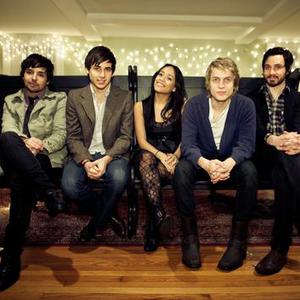 The Morning Of released their first album, "The World As We Know It", on Tragic Hero Records/East West in Jan. of 2008. The band was in bliss to see their very first album debut at number 18 on the Billboard Heatseeker's Chart, to reach the 25th pop album on iTunes, to have their single "Reverie" reviewed in USA Today, and to be featured on MTV.com's Buzzworthy Blog, all while touring the entire country several times in support of their record.

After all of this, the dual fronted NY native pop/rock act known as The Morning Of is finally gearing up to release a new record after what the band says "feels like forever and a day". These young, yet seasoned touring artists have built their grass roots following as well as their songwriting abilities from the ground up through years of touring and hard work, which is a rare and under-appreciated sight in today's music industry. The band has just finished recording their sophomore album with producer Jim Wirt (No Doubt, Incubus, Hoobstank, Jacks Mannequin, The Rocket Summer) at 4th Street Recording Studios in Santa Monica, CA and are preparing for an early 2010 release on Tragic Hero/East West/Lab Records. "We honestly think that everyone is in for a huge surprise with this record. It's still us, but we've been through so much in the last few years that have drastically changed us as people, artists, and songwriters", says pianist/guitarist Chris Petrosino. "A lot of people don't realize that a lot of the songs on TWAWKI were written when we were 15 and 16 years old, so we're beyond ecstatic to have an honest, relatable record that we're all extremely proud of, and that is current with where we're at as individuals and musicians", adds guitarist Rob McCurdy. "I just absolutely cannot wait for everyone to hear this album that is our own, and to start touring heavily behind this record", concludes vocalist Justin Wiley. Be sure to stay current with The Morning Of as video updates, pictures, live performances of new songs, and eventually the first single and new record are unveiled.
Feel free to hit us up on Aim, we love chatting it up:
Jessica- Ooooh jessica
Abir- circlesdobreak
Rob- electricstar1
Chris- crispi04
Jimmy- jimmik
Justin- epiloguesucks

The Way I Fell In

The World As We Know It