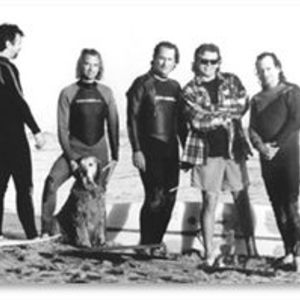 THE MALIBOOZ John Zambetti and Walter Egan are celebrating forty years of making music together as The Malibooz. Formed in the ?surf mecca? of New York City, The Malibooz proved to be a major attraction on the Eastern seaboard from 1964-66. They released an EP in 1964 and the single ?Goin' To Malibu? in 1965. This led to appearances at The New York State World's Fair. First, at the New York State Pavilion and then as part of the first color TV broadcast live from the RCA Pavilion.

John Zambetti and Walter Egan are celebrating forty years of making music together as The Malibooz. Formed in the ?surf mecca? of New York City, The Malibooz proved to be a major attraction on the Eastern seaboard from 1964-66. They released an EP in 1964 and the single ?Goin' To Malibu? in 1965. This led to appearances at The New York State World's Fair. First, at the New York State Pavilion and then as part of the first color TV broadcast live from the RCA Pavilion.
(A section of this show appears on the 1981 Rhino Records release "Malibooz Rule! which was re-issued on CD in 1998 ).

In the Fall of 1966 John, Walter, & drummer Tom Scarp entered Georgetown University. By this time the British Invasion and the beginnings of psychedelia had displaced Surf Music. The boys quickly found additional musicians and with the addition of lead singer, Annie McLoone the band became known as Sageworth . By 1970, Sageworth had become the top draw in the Washington, D.C. area opening for acts such as Jefferson Airplane, The Grateful Dead, The Allman Brothers, and Poco, and culminating with an appearance before an estimated 500,000 people at the Washington Monument during the march on Washington.

Sageworth was pursued by several labels, primarily Columbia and MCA, however no deal was ever reached. After graduation, Walter stayed with Sageworth in D.C. collaborating with songwriters like Gram Parsons and finally moving the band to Boston. John formed the group "Wine-Dark-Sea? who performed original songs in the movie "Jigsaw Puzzle? which was a short film that opened for The Rolling Stones film "Gimme Shelter".

In 1971, John began medical school in NY and continued to do clubs, occasional concerts and session work. During that time he played with people like Emmylou Harris, Rick Roberts and The Flying Burrito Brothers, Jeff ?Skunk? Baxter? and Dan Fogelberg. Meanwhile, Walter continued with Sageworth until 1972 when he moved to California to play with Linda Ronstadt and then Jackson Browne all the while honing his original material a pursuing a solo career. In 1975 John and Walter again joined forces to record a duo album which was never released.

After completing his medical education, Zambetti moved to California in 1976 to join Egan. The Walter Egan Band was signed to Columbia for five albums and then to MCA. Walter's first two albums, ?Fundamental Roll? and ?Not Shy? were produced by Lindsey Buckingham and Stevie Nicks. ?Not Shy? produced the million selling hit "Magnet & Steel" which was the American Music Awards nominee for Song of the Year in 1978. In 1998 "Magnet & Steel" appeared in the Golden Globe and Academy Award winning movie, "Boogie Nights". "Magnet & Steel" has also been used in several other movies including ?Deuce Bigelow? as well as in a Toyota commercial.

John also pursued his solo work with The Johnny Z Band which was selected as one of the Top 10 L.A. Bands of 1980 by Music Connection Magazine. Well known to the L.A. club circuit, The Johnny Z Band shared the bill with many other up and coming L.A. groups like The Police and The Motels.

In 1981 Rhino Records signed The Malibooz for a reunion album "Malibooz Rule!". This yielded the single " Hot Summer Nights" which appeared in the movie "California Girls". The video for ?Hot Summer Nights? was filmed around Zambetti's guitar-shaped pool at his Topanga Canyon home and was one of the first videos aired on MTV. They followed up the album with a string of singles and concerts through 1984.

In 1987 The Johnny Z Band signed to Cypress/Polygram Records and released the album "Bring Back the Night". The title tune was co-produced by Fleetwood Mac's Richard Dashut and the album included the duet with Emmylou Harris, "Right Between The Eyes". Walter and Supertramp's John Helliwell also made guest appearances on the album.

During this period The Malibooz recorded the theme song for the Pay Per View TV show "Bikini Beach Party" and in 1992, The Malibooz recorded the CD "A Malibu Kind of Christmas" for Iloki Records. Three tunes from this CD, ( ?It's Just Not Christmas Without You?, ?Santa Man?, and ?Rudy? ) appeared on the soundtrack of the Whoopi Goldberg movie, "Theodore Rex" released in 1996. Also, in 1996, Rhino Records released the surf music boxed set "Cowabunga Surf!" which contains The Malibooz performance of "Goin' To Malibu".

Later that summer ?Goin' To Malibu? was chosen as the theme song for the MTV Malibu Beach House Beach Party which led to John's appearance and interview on MTV.

In 1999 The Malibooz released ?Living Water (The Surfer's Mass). On this CD they explored the spiritual aspects of the ocean and surfing. It was chosen one of the top 5 albums of the year by CD Magazine.

2002 brought the CD, ?Beach Access? which features a whole new line-up of songs from Walter & John. It made it to the semi-finals in 5 categories of the 2003 Grammy Awards including ?Best Album Packaging? with its innovative use of real seashells in the CD case.

The Malibooz ended 2003 with the release of the DVD of their first TV Special, ?Celebrations: A MALBU CHRISTMAS?, hosted by Carmen Electra. The special included 13 songs (with 5 on-screen performances) by The Malibooz

April, 2004 saw the release of the STEP INTO LIQUID soundtrack. The film will have its official opening in Japan in August 2004.

June, 2004 The Malibooz will release ?The WRVR Sessions ?65?. This limited-edition 3-song CD contains the unretouched first recording session by The Malibooz from January, 1965. Due to the recent interest in the ?East Coast Surf Sound of the ?60s?, The Malibooz decided to release this CD. Ultimately, the band will release ?The Malibooz' Archives? which will be a multi-CD release containing all of the bands' recordings from the ?60s.

?The WRVR Sessions ?65? made it to the semifinals of the 2005 Grammy's for ?BEST PACKAGING? (The CD packaging is an exact reproduction of the tape box of the original sessions, including a piece of recording tape displayed in the CD's spine.)

?The Call of the Wave? made it to the semi-finals in the category of ?BEST SONG FROM A MOTION PICTURE SOUNDTRACK? for the 2005 Grammy Awards.

In October, 2004 The Malibooz performed at the legendary Cavern Club in Liverpool, England. Preceding the show they appeared on BBC Radio for an interview and live concert.

A Malibu Kind of Christmas