The Lords Of The New Church 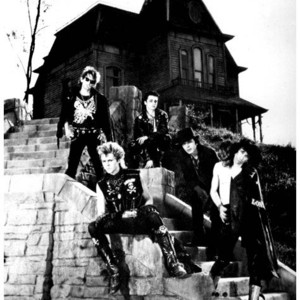 Formed in 1982, the band featured Stiv Bators (The Dead Boys), brian james (The Damned), Dave Tregunna (Sham 69), and Nicky Turner (The Barracudas). The band recorded three studio albums and one live album in their career together. Bators ended the band on stage after a concert on May 2, 1989, at the London Astoria. The first album was the selftitled The Lords Of The New Church that came out in 1982.

The following album came in 1983 and was called Is Nothing Sacred?In 2003, founders Brian James and Dave Tregunna recruited Adam Becvare of The LustKillers to front a series of recordings and European Tour. Becvare again fronted the band in 2007 and continues to work with the band at their request.
In March 2008 a new double CD was released by Easy Action records with brand new album cover artwork by original Lords album cover designer Graham Humphries and liner notes by Brian James. This 2 CD album called Rockers is one CD of tracks selected from across all three albums completely remixed by founder member Brian James. Mixes where made from original Multi track masters at Abbey Rd. The second CD contains an unreleased live show from the groups first world tour of 1982.

Affectionately called simply "The Lords" by their most devoted fans, the band's image blurred the lines of batcave rockers and glam punks such as Hanoi Rocks. (vocalist Michael Monroe actually guested on one of the Lords albums using the saxophone - can anyone verify this?) - Saxophone on the original albums where played by Rudi Thomson and Simon Lloyd. Todd Rundgren produced & recorded the song Live for Today that is found on Is Nothing Sacred?

Despite releasing numerous singles in the new wave/gothic rock genre, The Lords were one of the few bands that could also pull off pure-punk rock anthems such as "S, F, & T (Sucked, F*cked, & Tattooed)" and the title track "Method to My Madness" of their third album The Method to Our Madness.

The Method To Our Madness

The Lords Of The New Church