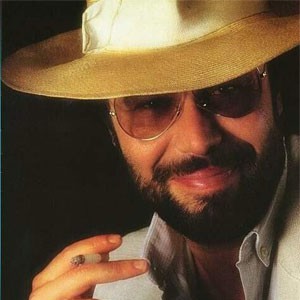 Antonello Venditti (born March 8, 1949) is an Italian singer-songwriter who became famous in 1970s for the social themes of his songs. Antonello Venditti was born in Rome, the son of a police commissary. He studied piano in his youth and made his debut in the music world in the early 1970s at the Folkstudio of Rome, together with singers the like of Francesco De Gregori and Giorgio Lo Cascio. In duo with the former he released in 1972 his first LP, Theorius Campus.

Antonello Venditti was born in Rome, the son of a police commissary.

He studied piano in his youth and made his debut in the music world in the early 1970s at the Folkstudio of Rome, together with singers the like of Francesco De Gregori and Giorgio Lo Cascio. In duo with the former he released in 1972 his first LP, Theorius Campus. The LP scored little success, but Venditti at least made himself being noted for the strength of his vocal qualities and for his attention for social issues, evidenced by pieces like "Sora Rosa" which is sung in Roman dialect. Also in dialect was "Roma Capoccia", a declaration of love for his city, that later became one of his most famous songs. Curiously, Venditti refused to sing it for several years, as he considered it not politically or socially "engaged" enough.

Venditti subsequently moved to Milan and released L'orso bruno (1973), made in collaboration with musician Vince Tempera: this album included another song in dialect, "E Li Ponti So' Soli", but for the rest was marked by an even stronger attention to social themes. His next work, Le cose della vita ("Things of Our Life"), released the same year for the colossus RCA Music, confirmed this tendency. The following LP Quando verr? Natale ("When Christmas Will Come") was similar; its even more naked arrangements emphasize the strength of Venditti's denunciation. After a live performance of the song "A Cristo" ("Hey, Christ"), he was denounced by an Italian Police officer for blasphemy: Venditti, however, was later totally acquitted.

Venditti's fortunes grew and peaked in 1975, with the LP Lilly: the yearning title-track was another strong accusation, this time against drugs, but it met an outstanding success anyway. Other famous pieces in the album were "Compagno di scuola" ("Schoolmate") and the long ballad "Lo Stambecco Ferito" ("The Wounded Steinbeck"), the story of a corrupted Northern Italy tycoon. Venditti continued to deal with front-page facts with the following LP, Ullal? (1976), whose "Canzone per Seveso" was about the eponymous industrial accident that happened in July of that year.

Political involvement, however, had side-effects on Venditti's inspiration in the late 1970s, marked in Italy by the growing menace of terrorism and by the strategia della tensione: some events (like the public booing of his friend De Gregori by politicized fans during a show) forced him to rethink his way of being a public personality. Sotto il segno dei Pesci ("(Born) Under the Pisces astrological sign", 1978) contained more personal and intimate themes. The eponymous track scored a great success, but was largely misinterpreted as a song about a woman: it instead referred to Venditti's career itself; he was effectively born "under the Pisces sign".

Success was however marred by his divorce to his wife Simona Izzo. She won custody of Venditti's son, Francesco Saverio. The following LP, Buona Domenica (1979), was highly marked by this difficult period. It contained anyway several classics, like the title-track and the ballad "Modena", which featured Gato Barbieri saxophone and is considered one of his finest works.

In 1982 the bitter Sotto la pioggia marked Venditti's passage to his own label, Heinz Music, and the beginning of the long-lasting collaboration with producer Alessandro Colombini. The following year A.S. Roma, his city's football team, won its long-awaited second scudetto: Venditti was therefore called in the official celebration show, and the song that he composed for the occasion, "Grazie Roma" ("Thank You Roma"), turned into a great success, surprisingly not confined to Rome's boundaries. Venditti had already composed several songs about his favourite soccer team: some criticized them harshly, mostly because of the strong contrast with the political-social themes of his other songs.

In following years, and notably in the 1990s, Venditti inspiration seemed to become more mainstream and commercial. His LPs (Cuore, In questo mondo di ladri, Benvenuti in Paradiso, Prendilo tu questo frutto amaro) were very successful, but his former themes were absent, or generally less stressed. Pieces like "Notte prima degli esami" or "Ma che bella giornata di sole" (about the Italian Liberation Day of September 1943) were anyway praised by critics. Among the songs of this period, "Dolce Enrico" was dedicated to the former leader of Partito Comunista Italiano, Enrico Berlinguer, dead in 1984.

Antonello nel Paese delle Meraviglie ("Antonello in Wonderland") of 1997 featured his greatest hits accompanied by the Bulgarian Symphony Orchestra of Sofia, directed by Renato Serio. Goodbye Novecento (1999) gave increasing attention to social and historical themes, but had a sub par success for Venditti's standards. In 2001 A.S. Roma won again a scudetto, and Venditti played again in a free concert in the Circo Massimo for an immense audience of tifosi and lovers of his songs. His latest studio release is Che fantastica storia ? la vita ("What a Fantastic Story Is Life", October 2003). Gato Barbieri played with Venditti in this release. After resolved the difficulties in his friendship with Venditti, told in the latter's 1979 song "Scusa Francesco", "Sorry Francesco", De Gregori is also present as singer in "Io e mio fratello" ("Me and My Brother"). The album also contains a satire of Italian Prime Minister, Silvio Berlusconi ("Il Sosia").