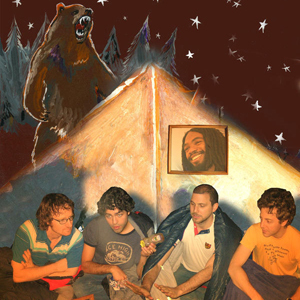 The Honey Brothers formed about one dog year ago at ukulele fantasy camp in Requiem, Mass. They learned to harmonize by listening attentatively to the usual: Bill Munroe, gospel, early Wings recordings. They experimented lots: e.g. mastered the art of fa-so-la singing, advanced human beatbox technique in ways that have gone underappreciated to this day. Like many other bands they developed an "it."

At some point they decided to take "it" to the streets of New York: in the hopeful months of early 2002, a bit Mariachi style, they serenaded attractive homeless people and made many important contacts. More recently, Hoyt, Dorian, Dr. J Carl, duContra, and Kid Walker have been known to rock in "clubs of the night," i.e. night clubs. They play, in no particular order: banjo, ukulele, electric guitar, and cowbell, and sing multi-part harmonies--often in tune.

Their debut EP, "Honey 4 U," was produced by filmmaker Ari Gold and engineered by Adrian Grenier (now available only on Ebay and Amazon for ungodly heaps of money). If you listen closely you can barely make out what sounds like a theremin under the layers of mellifluous music. Is it? You'll have to check out the music for yourself to find out. (hint: it's not)

Songs For Your Sister