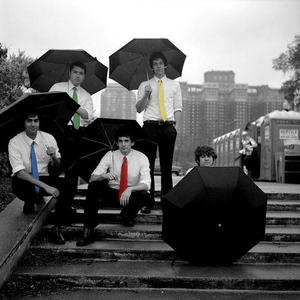 Tally Hall is a rock band formed in December of 2002. Once under the Atlantic Records recording label, Tally Hall is, again, signed to indie label Quack! Media who previously helped finance and nationally distribute their debut studio album, Marvin's Marvelous Mechanical Museum. They have recently released their second album Good & Evil (which was recorded in October/November 2009 with Atlantic Records) on June 21, 2011, under the Quack! Media record label.

They are based in Ann Arbor, Michigan, where they have reached "iconic" status. They each wear different colored ties in their "uniform." The band consists of Rob Cantor (Yellow), Joe Hawley (Red), Zubin Sedghi (Blue), Ross Federman (Grey), and Andrew Horowitz (Green). Their music is self-described as 'wonky' rock or most recently described by the group as 'fabloo'.

Celebrated by their fans for good humor and better yet music, Tally Hall is obtaining a growing legion of fans around the world.

Andrew Horowitz has won the John Lennon Songwriters Award once for Good Day and was nominated for Just Apathy.