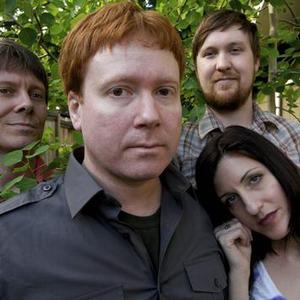 The High Violets formed after the demise of legendary Portland favorite The Bella Low, a band that played regularly with The Dandy Warhols. Lead guitarist CLINT SARGENT and drummer Luke Strahota picked up the pieces from that band's crash and put together a remarkable group of musicians to form The High Violets. Influenced heavily by the sounds of MBV, Ride, Spaceman 3, Lush, and the Cocteau Twins, the band soon developed a following. After a few early line-up changes they drafted in one of Portland's most amazing voices, Kaitlyn Ni Donovan.

Having an extremely successful solo career of her own, Kaitlyn immediately added the lush vocals and beautiful melodies the band needed. One self-released EP later, the band were in the studio recording their debut album "44 Down." Released in 2002 on independent label Reverb Records, the album was singled out by Under the Radar and Magnet magazines with full page features, noting its influence.

The High Violets followed up their debut with the album "To Where You Are," which was released in 2006 (Reverb). Produced, engineered, and mixed by Tony Lash (Dandy Warhols, Elliott Smith, Tahiti 80) and Jeff S. Saltzman (Sleater Kinnery, Stephen Malkamus), it took over three years to create and was well worth the wait. Press releases proclaimed Clint Sargent's layered guitars the standout feature and Kaitlyn ni Donovan's watercolor vocals the crowning jewel on the CD's shimmering sounds -- "well crafted songs giving fans new and old a healthy dose of their soft and hard sides expertly mixed together." Portland's KINK radio showcased the album on its Local Music Spotlight and Seattle's KEXP invited the band to perform a live broadcast prior to their CD release.

The band completed a successful nationwide tour in 2006 along with performances at the SXSW Music Festival and Musicfest NW. While in Austin they met Emmy-winning producer, director, and editor, Dutch Rall, who worked with the band to produce a fantastic video of "Invitation," and a mini documentary that recently aired on PBS. Check out the video on www.myspace.com/thehighviolets.

To Where You Are