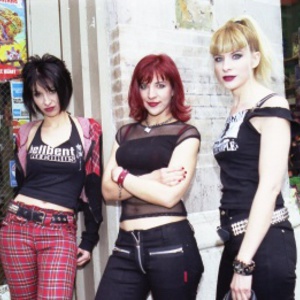 The Eyeliners formed several years ago when three sisters from Albuquerque, NM wanted to start a band. Gel and Lisa took on the responsibilities of guitar and bass respectively and Laura was going to be the singer. Since they never set out to form an all-girl band, The Eyeliners auditioned both male and female drummers, but couldn't find anyone who understood the direction they wanted to go in. They began to wonder if this band would ever become a reality. That's when fate stepped in. Gel had borrowed a drum set from a friend that they were using for the drummer auditions.

One day, Gel and Lisa were rocking out to "I Love Rock N Roll" when Laura walked in. They persuaded Laura to try the simple drumbeat on the borrowed drum set. Although she had never played drums before, she picked up the drumbeat remarkably fast. About halfway through the rendition of the song, she started to sing along. It was then that Laura took on the task of lead vocalist and drummer and what was to become the Eyeliners was soon underway.
The band played their first show under the name Psychodrama but upon touring the west coast, they decided to change their name to something much more appropriate and unique - The Eyeliners.

A few months later, fate stepped in again when The Eyeliners played a show with the Red Aunts. Red Aunts frontwoman, Terri Wahl was so impressed with the band that she introduced them to owner of Sympathy For the Record Industry - Long Gone John and pretty soon, the Eyeliners debut CD and 7" were in the works! Two more seven inches ("Do The Zombie" and "Rock N Roll, Baby") followed on Sympathy for the Record Industry over the next couple of years.

In 1999, The Eyeliners caught the attention of Ben Weasel and he was eager to release their newly recorded album "Here Comes Trouble" on his label Panic Button Records, to be co-released with Lookout! Records. "Here Comes Trouble," which was recorded with Mass Giorgini (Screeching Weasel, The Queers, Groovie Ghoulies etc.), was released in March 2000 to rave reviews, the Eyeliners then joined up with the Mr. T Experience and American Steal on the Lookout! Freakout Tour in September 2000 and followed that up with 2 sold out shows with Screeching Weasel at the House of Blues in Chicago.

2000 saw the release of "Here Comes Trouble", followed by other pop-punk gems such as "Sealed With A Kiss", and their latest release is "No Apologies".

It was during this time that they truly began to sharpen their sound, blending well-crafted pop punk songs about love and heartbreak with 50's rock n roll style and attitude. "Sealed with a Kiss," was recorded and produced by Ryan Greene (NOFX, Lagwagon, Me First and the Gimme Gimmes, No Use For A Name, Lunachicks, etc.) With it The Eyeliners take their song writing to a new level musically while maintaining their trademark style and attitude that they are known and loved for.

Having played over 250 shows with such bands as Screeching Weasel, Fugazi, L7, The Queers, The Mr. T Experience, Red Aunts, Groovie Ghoulies, The Specials, The Avengers, Vice Squad, Flogging Molly, Southern Culture on the Skids, Dillinger 4 and Man Or Astroman, The Eyeliners have earned the respect of reviewers, press, and fans alike as an energetic and unpredictable live band that is not to be missed.

Sealed With A Kiss