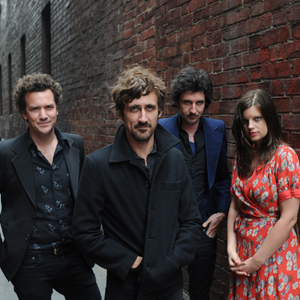 There are at least three bands called The Drones: 1. an Australian rock band of the 2000s 2. a British punk band of the late 70s 3. a British contemporary string quartet 1) The Drones are Gareth Liddiard (vocals, guitar), Fiona Kitschin (bass), Dan Luscombe (guitar) and Mike Noga (drums). The group are based in Melbourne Australia and rose to prominence during the early 2000's. Like other Australian bands - The Triffids, The Go-Betweens, Nick Cave, and Dirty Three - The Drones left Australia in 2005 to concentrate on its European audience; however...

1) The Drones are Gareth Liddiard (vocals, guitar), Fiona Kitschin (bass), Dan Luscombe (guitar) and Mike Noga (drums). The group are based in Melbourne Australia and rose to prominence during the early 2000's. Like other Australian bands - The Triffids, The Go-Betweens, Nick Cave, and Dirty Three - The Drones left Australia in 2005 to concentrate on its European audience; however, since doing so there has been a groundswell of interest in the band, due to the acclaim and publicity received both at home and abroad. Musically, the band does not fit easily into conventional rock music categories; while some of their material is based on conventional rock sounds and song structures, they also venture into the noisy, atonal, blues-based music.

The first incarnation of The Drones formed in Perth in 2000. Rui Pereira and Gareth Liddiard had previously played together in the Gutterville Splendour Six, and in early 2001, they relocated to the east coast to accelerate their progress. Initially they met with little success and endured tough conditions, including an extended stay in a decrepit Victorian caravan park. They recruited Kitschin and drummer Christian Strybosch, going on to complete their debut album, Here Come The Lies, released on Spooky Records in 2002.

The Drones' third studio album, Gala Mill, was recorded in an old mill an isolated 10,000-acre (40 km2) farm on Tasmania's east coast at Gala Farm in Cranbrook, Tasmania. It was released in September, 2006. The album was also nominated for the 2006 Australian Music Prize. In late 2006, Liddiard announced that Rui Pereira had left the band, to be replaced by Dan Luscombe. In November 2006, The Drones, through American label Kufala Recordings, released a live album recorded at Spaceland, a nightclub in the Silver Lake neighborhood of Los Angeles, California, called simply LIVE [in Spaceland - November 15th, 2006].

In July, 2008 The Drones released a digital/12" EP featuring new songs "The Minotaur" and "Nail It Down," the first songs from their next album, Havilah. The album released in September 2008 (Australia) and February 2009 (UK, USA) by ATP Recordings. The title of the album is a biblical reference to a Shangri-La-esque town Havilah with an abundance of gold. It is also the name of a valley near where the album was recorded. The album was recorded at the mud-brick home of lead singer Gareth Liddiard and his partner/band bassist Fiona Kitschin, outside Myrtleford at the base of Victoria's Mount Buffalo. The album was produced and engineered by Burke Reid (The Mess Hall, Gerling) who had to set up a mobile studio in the house, powered by a diesel engine. The album debuted at #47 on the Australian album charts. At the fourth annual AIR Awards held on 22 November 2009 The Drones won two awards, 'Best Independent Album of the Year' for Havilah and 'Independent Artist of the Year'. At the inaugural Australian Rolling Stone Awards, held in Sydney in January 2010, The Drones won the 'Best Live Act' award. In November 2009 a poll of contemporary Australian songwriters organised by Triple J, "Shark Fin Blues", was voted by as the greatest Australian song.

2) A 1977 era Manchester original Punk Rock act:
Originally a pub rock called Rockslide who released a single called 'Roller Coaster' which got nowhere. Sniffing the punk wind of change in'76 however, they emerged as one of the most exciting bands from Manchester's punk scene. While Slaughter & The Dogs erred on the Glam side and The Buzzcocks delivered pop with a buzzsaw, The Drones, who could obviously play, took the energy of punk to heart and delivered it on vinyl in a series of taut, amphetamine driven toons. With a mixture of originals like Persecution Complex, Lookalikes and Corgi Crap and covers such as Search & Destroy & My Generation they blitzed venues like Pips, Rafters and The Electric Circus.

Their first single Temptations Of A White Collar Worker was classic punk containing the excellent Lookalikes. The single sold over 10,000 copies on their own label OHM's records.
Signing to Valer records the future looked rosy. The 'Bone Idol / Just Wanna Be Myself' single was the classic and shifted over 20,000 copies. Supporting bands like The Stranglers (even joining them for encores of Go Buddy Go) followed with some good press in the music weeklies like Sounds and features in Fanzines such as Shy Talk and Summer Salt increased their profile. While recording demos for their Bone Idol single they also recorded a number of pisstakes of Clash songs which Strummer found amusing on hearing bless him.

Live At The Hi-Fi