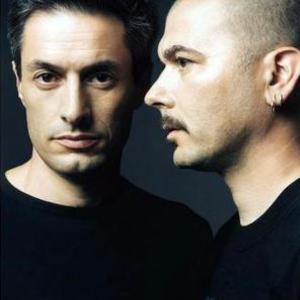 The Dining Rooms are Stefano Ghittoni and Cesare Malfatti. Stefano Ghittoni, resident DJ at Magazzini Generali in Milan, spurred the initial creative process behind the duo's musical direction in 1998. Cesare Malfatti, on the other hand, is a founding member of the post-blues project 'La Crus'. Both Stefano and Cesare come from the punk/new wave scene and they have played in several underground bands in earlier years.

As a side project to this record, Stefano Ghittoni works with videomaker Maria Arena on the 'Ambient Blues Caffe'' project, an ambient sonorization project for turntables and video performed all over Italy and Europe.

The second Dining Rooms album, "Numero Deux", which features a multimedia section with videos by Maria Arena (one of which is dedicated to J.L.Godard), is released in January 2001 and picks up the stylistic streak of "Subterranean Modern Volume 1", enriching its sound with the addition of jazz atmospheres and introducing vocal parts performed by the minimal-soul duo "Sepiatone" (Hugo Race and Marta Collica). In summer 2001 "Numero Deux" was also released in the US, Japan and Germany through Guidance Recordings.

To promote the new record, The Dining Rooms have developed and enriched the audio-visual experience of the 'Ambient Blues Caffe'', giving birth to the new set named 'FILM'. The new live performance includes DJ and live sets by Stefano Ghittoni and Cesare Malfatti (using computers, samplers and turntables) and the enhanced visual experience provided by Maria Arena.

"Tre", was released in spring 2003 on Schema Records. The record delves further into the themes of the two preceding releases, adding faster rhythms and a more focused production.
The record also features important vocal contributions by Anna Clementi and Sean Martin and production assistantship by Soulpatrol, among others. Like "Numero Deux", "Tre" was released in the US, Japan and Germany through Guidance Recordings .

In early 2004, "Versioni Particolari" hits the shelves. It is an album of remixes previously released on 12" vinyls, new versions, and unreleased Dining Rooms goodies, and features work on Dining Rooms tracks done by heavyweight producers like Nicola Conte, Soulpatrol and The Cinematic Orchestra, among others.

Also in 2004, Stefano created the new sub-label Big Sur in partnership with Schema Records. Specializing in afro-house and funky beats, Big Sur is home to a growing number of artist, including another side project/ collaboration of Stefano's - in this case with Marco Rigamonti, as Double Beat.

The Dining Rooms live show was then further developed into a full live set, taking advantage of a five-piece band and enriched, as always, by Maria Arena's evocative video work. The live experience and the idea to work on songwriting become the conceptual and stylistic basis for The Dining Rooms' fourth studio album.

"Experiments In Ambient Soul" was released through Schema in late spring 2005. E.I.A.S. is a journey into modern funk and jazz. It features a collection of inspired and soulful tracks with contributions by Don Freeman, Amraah 8, Sean Martin, Hugo Race and Marta Collica.

In the spring of 2006 the second chapter of Versioni Particolari is released. "Versioni Particolari 2" is a collection of remixes and unreleased versions taken from 4 vinyl singles that followed the album release of "Experiments in Ambient Soul"(2005). The songs contained in "E.i.A.S" here receive new, vital energy courtesy of some of the most interesting music producer of these contemporary times while the two unreleased tracks add further deepness to the producing standards of the The Dining Rooms.

One year after, spring 2007 see the release of their fifth album Ink. INK, a word that manages to recall associations with the written word, the permanence of text and perhaps the darkness of ink black, is the title of The Dining Rooms' upcoming latest effort. A return to their darker origins that is sure to enthrall all ears with crystal clear production, solid structure and an impressive attention to detail. Sounding almost as a concept album, it combines the production style of Experiments In Ambient Soul, live instrumentation and vocals resulting in a rounded groove, with the cinematic, ethereal atmospheres characterized by the sound of "Numero Deux" and "Tre". This work features new remarkable collaborations by international artists such as Dodo N'kishi (Mouse on Mars) from Africa via Germany; Georgeanne Kalweit, from U.S.A. via Milan, and Tomaz Di Cunto, from Brazil.

Turn To See Me