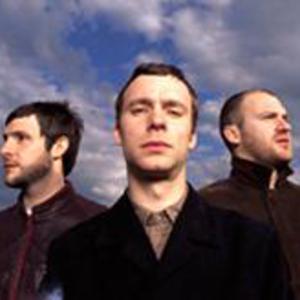 Blue States is an electronic/dream pop band headed up by Andy Dragazis. The band has been active since 1997 and is still producing music out of Sussex, England as of 2005. A track from their 2002 album Man Mountain, "Season Song", appeared on the soundtrack to the British horror film, "28 Days Later". 1998 Inspired by Aphrodite&rsquo;s child and David Axelrod, 22 year old, half-Greek man mountain Andy Dragazis aka Blue States records demos on his home studio set up in a barn on the Sussex Downs in England.

1998 Inspired by Aphrodite&rsquo;s child and David Axelrod, 22 year old, half-Greek man mountain Andy Dragazis aka Blue States records demos on his home studio set up in a barn on the Sussex Downs in England. Sends demos to fledgling label Memphis Industries who like them very much and get in touch.

1999 First release for both Blue States and Memphis is the ?Blue States Forever? EP. Further EPs follow ? your girl and Walkabout. Blue States find themselves in some weird downtempo twilight zone inhabited by Zero 7, Bent, Lemon Jelly and many more.

2000 Blue States release their first album Nothing Changes Under the Sun, an expansive, windswept, epic stand out tracks include Your Girl and Stereo 99. It's critically acclaimed and starts to sell surprisingly well.

2001 Blue States are naturally asked to perform at the Big Chill Festival in Somerset, England and Andy hastily puts a band together including Sam Walker (drums), Chris Carr (guitar), Dicken White (guitar) and Karl the Jackal (bass) ? Andy takes up keyboard duties. This ramshackle unit starts touring round the UK. The album is licensed to the Thievery Corporation's record label Esl Music and gets a US release. Lady singer Ty Bulmer joins the band to add some sass and vocals.

2002 Andy begins work on second album Man Mountain with Ty plus a gaggle of other local musicians ? there's a brass section, a string quartet, congas, live drums, Theremins and more. The result is a rich, melodramatic brew and the album is licensed to XL Recordings for the world, save the US were it stays on ESL. The band head to the US to tour, with Jon Chandler joining on drums, and perform at the Winter Olympics in Salt Lake and SXSW. Season Song, one of the albums stand out tracks is used as the lead track on the movie 28 Days Later.

2003 Ty leaves Blue States to start her own band, New Young Pony Club. Andy regroups, reappraises and decides he wants to be in a proper indie rock guitar band, the downtempo tag having becoming pretty tiresome. He coalesces around Jon Chandler and Chris Carr, with Chris taking up vocal duties. The new three piece start recording next album The Soundings. Its Blue States' best album yet with nods to My Bloody Valentine and Ride, the sound of Andy, Jon and Chris's early tennagedom.

2004 Memphis release The Soundings and the band tour UK and the Scandinavia with label mates The Go! Team. Fractures appear in the triumvirate and the three piece splinters after a bun fight at Reading Festival.

2005 With Blue States seemingly in ashes Andy builds his own studio in a space in Whitechapel in London with the intention of producing other bands. He starts recording Memphis' eccentric axe god Toby Jenkins a.k.a. The Squire Of Somerton and his mates' The Eighteenth Day of May debut album for Ryko Disc.

2006 Andy gets the all singing all dancing The Pipettes gig and co-produces their debut album with Gareth Parton ? Andy contributes all of the string arrangements to the record ? its his strings that open stand out track Pull Shapes. Inspired by his time writing and recording with The Pipettes Andy decides to give Blue States another crack but this time on his own. He also starts playing live with the Squire of Somerton's new band, glam/prog outfit Zan Pan.

2007 Andy completes fourth Blue States' album First Steps Into... which includes vocal samples from an old ex girlfriend's Serena and Andy himself. It's a monumental, prog flavoured, filmic and highly melodic monster that outstrips anything that he has done before. Memphis Industries are all set and proud to release in 2007.

Nothing Changes Under the Sun