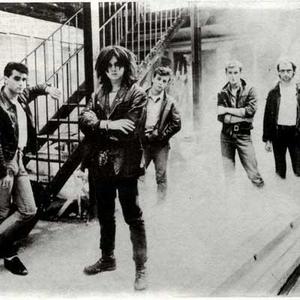 The Danse Society are a post punk group from Barsnley, England, active from 1980. The original line-up included Steve Rawlings (voice), Paul Nash (guitar), Lyndon Scarfe (keyboards), Tim Wright (bass) and Paul Gilmartin (drums). Lyndon Scarfe was replaced by David Whitaker (formally of band Music for Pleasure) after the Heaven is Waiting Album. In 1980, they recorded and released their first 7" single, "Clock," on their own newly-formed record label, Society Records.

In 1980, they recorded and released their first 7" single, "Clock," on their own newly-formed record label, Society Records.
The Seduction was their first independent album released on Society Records in 1982, a six-track album containing the live favourites "Godsend", "Ambition" and "Danse Move" as well as the atmospheric classic "In Heaven Everything is Fine". They recorded several Radio 1 sessions including a released John Peel session 'Woman's Own" and "Were So Happy" and topped the Independent Charts with the single "Somewhere".


Their most well known album, Heaven is Waiting, was released in December, 1983 by Arista. The album contained the singles "Wake Up" and "Heaven is Waiting" and a cover of The Rolling Stones song, "2000 light years from home", released in 1984 as a 12" single and as a limited edition double single. They released two further singles under Arista "Say it Again' and "Hold On". In 1986 after releasing their final album as Danse Society International, Looking Through back on their own label again the band split from Rawlings and the other band members left to form Johnny In The Clouds.
Rawlings later reappeared in 1987 as Society with the single, "Saturn Girl". After 1987, Rawlings continued to pursue his path in music in America with Meridian Dream.


At the end of 2009, Former members Paul Nash, Paul Gilmartin and David Whitaker met up for the first time in 24 years and decided to reform the band with the initial agreement of Steve Rawlings also re-joining the band. Over the next 9 months instrumental tracks were recorded and Steve briefly met the band in the UK in Oct 2010 but returned to America after recording just one vocal track. Plans changed when after that initial meeting, the band lost contact with Steve.

In January 2011 founder of Blooding Mask vocalist Maethelyiah joined the band and recorded vocals on all 13 tracks and the official news was revealed in May 2011. Since then the album Change of Skin has been refined and mixed and was released in July 2011.

2 official video clips were produced ("Revelation" and "God Cry") and a new one for the track "Vatican" is in the making.

A new EP is soon to be released.
2012 will see the The Danse Society back on stage again for new live shows.