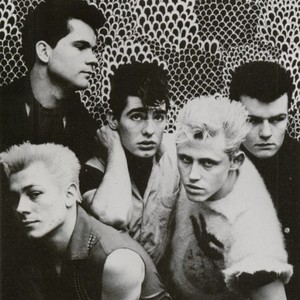 Theatre of Hate were a post-punk, goth rock band which formed in Britain in 1980, and disbanded in late 1982. However, they toured in April 2007, celebrating the 25th anniversary of their acclaimed Westworld album, which was reissued with some newly recorded tracks. Check www.kirkbrandon.com for info. Led by singer-songwriter and ex-member of punk band The Pack, Kirk Brandon, the original group also consisted of: guitarist Simon Werner, bassist Jonathan Werner (some sources say Jamie Stewart of The Cult fame) and drummer Luke Rendle.

Theatre of Hate garnered much early attention as a live act and in 1981 made their debut with the concert LP He Who Dares Wins Live at the Warehouse Leeds. Shortly after the album's release however, Brandon fired the remainder of the band and assembled a new line-up consisting of: guitarist Billy Duffy (formerly of The Nosebleeds), bassist Stan Stammers, saxophonist John Lennard and drummer Luke Rendle from Crisis (who was soon after replaced by Nigel Preston).

Another concert recording, Live at the Lyceum, followed in 1982 before Theatre of Hate entered the studio with producer Mick Jones of The Clash to record their first non-live album debut, Westworld, which went on to reach the UK Top 20. The album also spawned the Top 40 single "Do You Believe in the Westworld?".

In late 1982, Theatre of Hate released another live album entitled He Who Dares Wins: Live in Berlin.

In early 1983, the Theatre of Hate disbanded. Brandon went on to front Spear Of Destiny and guitarist Billy Duffy joined Ian Astbury in the group Southern Death Cult, which would later become successful after shortening their name to The Cult. A post break-up compilation album Revolution spent three weeks in the UK album chart.

Love Is A Ghost Live

Aria Of The Devil