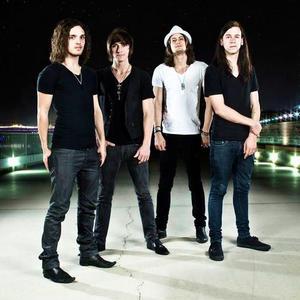 The Cab is an American rock band from Las Vegas, Nevada, signed to Fueled By Ramen subsidiary Decaydance Records. Their debut album, Whisper War, was released on April 29, 2008. They have also been called "The Band You Need To Know 2008" by Alternative Press. Band members Alex Deleon and Cash Colligan first began playing together in high school, and recorded demos as a duo which they put up on their MySpace page.

Band members Alex Deleon and Cash Colligan first began playing together in high school, and recorded demos as a duo which they put up on their MySpace page. Alex DeLeon asked drummer Alex Johnson (who was playing in a local hardcore band) to join The Cab. In late 2005, they were a full band with guitarist Paul Garcia, guitar/pianist Alex Marshall, and drummer Alex Johnson, and they played their first show at Rock n' Java in Las Vegas. The band signed to local label Olympus Records in January 2006; however, they released no material on Olympus. They gave a demo to Spencer Smith of Panic at the Disco at a Cobra Starship/Boys Like Girls/Cartel show, who helped them sign to Decaydance Records in May 2007. Shortly after this, the band's members graduated from high school. During this time they decided to replace Garcia with ian crawford, who moved from Washington to join the band.

Blender named them #75 on their Top 100 Hot Report in September 2007, before they had actually released any official material. The group has toured with We the Kings, Metro Station, Cobra Starship, Charlotte Sometimes, Forever the Sickest Kids, and others. In February 2008, their touring van flipped over in Wisconsin, but none of the band members were seriously injured, and they only missed one tour date. In March 2008 the band played SXSW in Austin, Texas.

Their Matt Squire-produced debut album, Whisper War was released on April 29, 2008 which featured Brendon Urie of Panic At The Disco and Patrick Stump of Fall Out Boy on the first single off the CD "One of THOSE Nights", which was written by Stump. The videos for "I'll Run" and "One Of THOSE Nights" feature members of Panic! At the Disco, while the latter also features Pete Wentz and Patrick Stump of Fall Out Boy. As of February 15, 2008, the featured song from the album, "I'll Run", had over 300,000 hits on the band's MySpace page.

On June 1, 2009, it was announced through www.symphonysoldier.com (Alex DeLeon's blog) that ian crawford had left the band on good terms and he is now currently touring with Panic! At the Disco as their stand-in guitar player.

On August 19th, 2009 it was announced that Cash Colligan left the band to focus more on his restaurant Johnny and Harry's. In October, Colligan announced he was joining the local Las Vegas band, Play For Keeps.

The Cab currently consists of DeLeon, Marshall, and Johnson, with a stand-in guitarist and bassist. They are playing the entirety of the Vans Warped Tour 2010.

And on Alternative Press.com, The Cab have revealed the title of their sophomore album. 'Symphony Soldier' is expected to be released late August/early September 2010