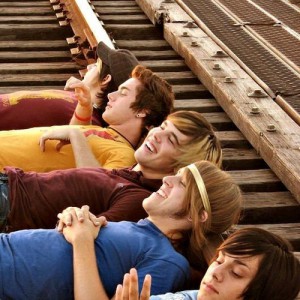 It's one thing to dream, and entirely another to make that dream reality: If you're not willing to lay it all on the line, all the talent in the world still won't bring you any closer to your goal. Despite their youth, this is something that School Boy Humor knows all too well. Built upon the foundation of twin brothers Phil and Anthony Evans, School Boy Humor will stop at nothing to make a heavy impact on the music world.

Built upon the foundation of twin brothers Phil and Anthony Evans, School Boy Humor will stop at nothing to make a heavy impact on the music world. From their not-so-distant days playing the clubs and basements of Little Rock, Arkansas all the way to your stereo, SBH have already traveled far and wide to get here, and their time has just begun. Running down the list of setbacks endured and sacrifices the band have made?everything from poverty to estranged parents to axed athletic careers?you have to wonder just what keeps the brothers going. Then you hear the songs, and it all makes sense.

?It's rough not knowing when you're going to eat again, or having to beg the promoter to buy you a pizza,? says vocalist/guitarist Phil Evans. ?But I don't have to wake up in the morning for a 9-to-5 job, and stress out about homework, and all of the other things we left behind. I think every path you take until you become successful is going to be tough in its own right.?

That spirit pervades the material the band recorded for its digital EP, Camera Shy But Still A Star, and their full-length debut on Vagrant (February 2009). Produced by the Geoff Rockwell (Forever The Sickest Kids, Sky Eats Airplane), the songs marry the band's love of giant hooks and frenetic riffs with Rockwell's flair for atypical rhythms and pulsing electronica, making for a sound that's contemporary but also driving and eclectic. And lyrically, although relationships are a core topic as in most pop music, with powerful compositions like ?This Is Your Life,? and ?Don't Look Back,? the band have also focused on something else they know all too well: what it means to be young kids chasing a dream.

"'Don't Look Back' was written to be pretty self-explanatory; the lyrics are about as literal as they can be,? says guitarist/vocalist Anthony Evans. ?[Vocalist/guitarist] Phil had to sell his car and is currently living on our drummer's floor. We've been broken down for weeks in New York, been in 110-degree weather with no air conditioning, and have loved every minute of it!?


?When you're in a band, people tell you you're not going to do anything with it, and to stop wasting your time. It's kind of discouraging, but at the same time, we've gone through so much, and I've given up so much, there's no quitting for me now,? Phil says. ?I want to have a platinum-selling record, and that's the honest truth?. I want to reach a million people, and we won't stop until we do.?