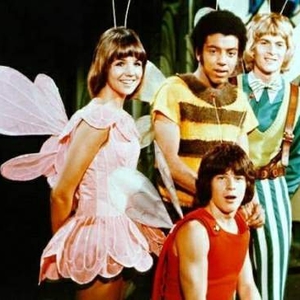 The Bugaloos is an American children's television series produced by brothers Sid and Marty Krofft in 1970. This Krofft live action puppet show aired on Saturdays from 1970 to 1972. The Bugaloos were a musical group comprised four British-accented teenagers, each with antennae and wings, who lived in Tranquility Forest and had their own rock band. They wore bug-oriented outfits which allowed them to fly (though on occasion flying on surfboards), and were constantly beset by the evil machinations of Benita Bizarre (played by comedienne Martha Raye)...

The show was produced by Sid and Marty Krofft, and aired on NBC from 1970 to 1972. Like its predecessor H.R. Pufnstuf (1969), The Bugaloos ran for only one season (1970-1971), with reruns airing the following year (1971-1972). It was shot in Los Angeles, California.
The title song The Bugaloos was written by Norman Gimbel and Charles Fox, the songwriters of Killing Me Softly with His Song.[5] A cover of The Bugaloos, performed by Collective Soul, is included on the 1995 tribute album Saturday Morning: Cartoons' Greatest Hits, produced by Ralph Sall for MCA Records.
The Bugaloos released an album in 1970 (Capitol Records ST-621), featuring studio recorded versions of the songs performed on the show.
One single was released in conjunction with the album: "For A Friend"/"The Senses Of Our World"