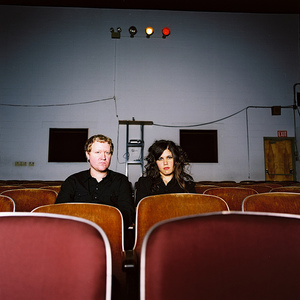 Talkdemonic blends styles to create a captivating sound which their own bio describes as "folktronic hop." Acoustic guitar and viola swell over electronic blips and textures while the drums provide repeating revelation as each hypnotizing loop is peppered with expressive beats, punctuated by cymbal crashes. Fresh and intriguing, this Portland, OR twosome delivers a dreamy, emotionally arresting package that gets better with each listen.

The group was formed by Kevin O'Connor (percussion, synthesizer, piano, multi-instrumentalist) and Lisa Molinaro (viola, synthesizer). Their releases include Mutiny Sunshine (Lucky Madison, April 2004; Lucky Madison reissue January 2005), Beat Romantic (Arena Rock, March 2006, US; Tangled Up! Recordings, September 2007, UK) and they have a new release, Eyes At Half Mast, due on Sept 16th 2008 on the label Arena Rock.

Eyes At Half Mast