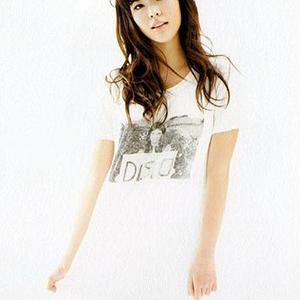 Lee Soon-kyu (born on May 15, 1989), better known by her stage name Sunny, is a Korean-American singer, dancer, DJ, MC, model, musical actress, lead vocalist and member of the Korean girl group Girls' Generation. Biography Sunny was born on May 15, 1989 in Los Angeles, California, and moved to Kuwait while she was still an infant. Her family moved to South Korea around the time of the Gulf War.[1] She has two older sisters, who share the same birthday as her but were born in different years. She speaks fluent Korean, along with basic Chinese and Japanese.

Sunny was born on May 15, 1989 in Los Angeles, California, and moved to Kuwait while she was still an infant. Her family moved to South Korea around the time of the Gulf War.[1] She has two older sisters, who share the same birthday as her but were born in different years. She speaks fluent Korean, along with basic Chinese and Japanese.[2] Her father was in the college band Hwaljooro with Bae Chul-soo.[3] She is the niece of Lee Soo Man, the founder of SM Entertainment.[4] In 1998, Sunny entered Starlight Entertainment and became a trainee for 5 years before transferring to Starworld where she became a member of a duet called "Sugar" which never debuted.[3][5] One of her older sisters was the manager for Sugar, but when the duo disbanded, she became active in other parts of the music industry.
In 2007, Sunny was recommended by the singer Ayumi, who transferred to SM Entertainment.[5] After several months of training under SM Entertainment, Sunny debuted as a member of Girls' Generation that same year.
[edit] Career

[edit] Girls' Generation
Main article: Girls' Generation
[edit] Singing career
Sunny has contributed to a couple of soundtracks as a solo artist, singing the theme song "You Don't Know About Love" for the SBS drama Working Mom, "Finally Now" for IPTV's Story of Wine and "Your Doll" for the SBS's Oh! My Lady.
She featured on the Heading to the Ground soundtrack, singing a duet with Taeyeon in the song SarangInGulYo and another song titled Motion performed with the vocal line of the group.
She participated in the S.E.O.U.L. song project along with Super Junior's Kyuhyun, Leeteuk, Ryeowook, Sungmin and Donghae and fellow group members Seohyun, Sooyoung, Jessica and Taeyeon.
She also sang the theme song for Caribbean Bay with her fellow members Taeyeon, Seohyun, Jessica, Tiffany and k-pop boy group 2PM.
Sunny featured in Brown Eyed Girls's Miryo's track "I Love You, I Love You" from her first solo mini album, Miryo A.K.A JoHoney .[6]
[edit] Voice Acting
Sunny took part in voice acting for animated film Koala Kid: Birth of A Hero with fellow labelmate Taemin from SHINee.[7]
[edit] Theatre
Sunny played the lead role of ?Brenda Strong' in the Korean production of Broadway musical ?Catch Me If You Can', which was opened on 28th March 2012 and with a scheduled run till 10th June 2012.[8] Her performance received positive critical review[9] and was nominated for Best New Actress in the 6th 'The Musical Awards',[10] South Korea's equivalent of Broadway's Tony Award.
[edit] TV shows
She was a permanent member on the show Star Golden Bell until Girls' Generation's song Oh! came out.
Sunny alongside with Yuri was a part of reality show Invincible Youth in which they were a part of G7, consisting of 7 girls from idol groups.[11] Due to Girls' Generation's Japanese debut and other activities, Sunny left the show, along with Hyuna and Yuri, in June 2010.[12]
On October 17, it was confirmed that Sunny would be joining for the second season of Invincible Youth 2, a Korean reality show alongside with Hyoyeon. She is the only returning member from original G7.
On July 6, a representative from S.M. Entertainment reported to the media, that Sunny will no longer be a regular casting member anymore alongside the members of G6 from Invincible Youth 2. The unexpected leave will mean that the July 7th episode of Invincible Youth 2, will be the last episode that Sunny will be featured as a permanent member. Sunny's leave does not include fellow Girls Generation member 'Hyoyeon' who will continue as a member on the show.
[edit] Show Hosting
She was a co-DJ of the radio show Chunji until the broadcast ended in July 2008.
She also co-hosted a music show called The M with Kim Hyung Jun of SS501 and Im Seulong of 2AM but had to leave the show due to her busy schedules. Her last appearance as an MC for the show was on April 4, 2010.[13]
Sunny, along with other notable celebrities, is part of the star-studded cast on SBS MTV's ?Music Island?, taking on the role of main MC. The first episode of ?Music Island? was aired on February 24, 8PM KST.[14]
[edit]