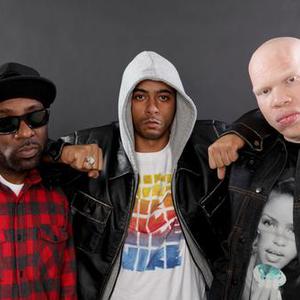 Strong Arm Steady was formed in the shadows of the West Coast's Death Row Records movement, which at one time, loomed large over much of the region's talent. Many Los Angeles artists?themselves students and children of Death Row?were becoming frustrated at the gang mentality that colored perceptions of their burgeoning underground. Out of that frustration came resourcefulness and unity, and as unity grew into community, L.A.'s indie scene began to blossom, not in opposition to Death Row, but as an alternative. They are the new generation. They are Strong Arm Steady.

The original crew consists of like-minded MCs, DJs, and producers who are among California's best: Krondon, Phil da Agony, Mitchy Slick, Xzibit, Chase Infinite, Planet Asia, DJ Khalil, and DJ Truly OdD. To best represent the Strong Arm Steady brand for the purposes of recording and touring, the collective was pared down to four in Krondon, Phil Da Agony, Mitchy Slick, and Xzibit. As the business of music came more into play, Xzibit departed, leaving the remaining three as the group's core.

Krondon, the literal and figurative voice of Strong Arm Steady, was born and raised in South Central, L.A. and began his career with the classic ?The Rules? 12-inch collaboration with Truly OdD. While coming up in local hip-hop circles, Krondon would often encounter Phil Da Agony of the Barbershop MCs and King Tee's Likwit Crew. The pair began hanging out in the late 90s, forming a friendship that would soon become a career partnership.

San Diego native and rap veteran Mitchy Slick was enlisted by way of his appearance on Xzibit's Weapons of Mass Destruction album in 2004 and soon helped Strong Arm Steady establish their influence in the mixtape market with that year's Gangs of L.A. Mixtapes became the crew's foundation as they were among the first West Coast artists who weren't DJs or DJ-affiliated to break through in the same manner as the platinum-selling 50 Cent and Young Jeezy. From Gangs of L.A. to this year's Gang Mentality, Strong Arm Steady found their voice by speaking directly to their fans and taking control of their own buzz, bridging the gap between independent and mainstream along the way.

The In Search of Stoney Jackson LP is produced entirely by Madlib, longtime friend of Phil Da Agony and extended Strong Arm Steady family. The album's conception owes a great deal to World Famous Beat Junkie, J.Rocc, who provided the trio with close to 200 of the prolific beatsmith's tracks to choose from. Strong Arm Steady had previously rapped over Madlib productions on 2007's Deep Hearted and on the Madlib and Talib Kweli Liberation album, but this full-length marks a long-desired collaboration between the four. It's a hip-hop jam session, with the group acting as the rhythm section for an all-star cast of guest vocalists such as Planet Asia, Guilty Simpson, Evidence, Chase Infinite, and Phonte of Little Brother.

In Search Of Stoney Jackson