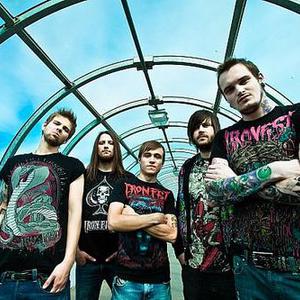 December 2006, Stigmata starts working on their new album and gives birth to its single named "Ice". Though it is not the first album the band releases, the single had absolutely no similarities with previous compositions. It seemed like it was the very first chapter in the brand new story, but with the same name - Stigmata.

The success in Russia came in the first couple of weeks after the single was released. First - leadership in the most famous alternative charts, then the "Ice" video becomes the best selling product of the A1 Channel, and in the end the song becomes the "Song Of The Year" on the St. Petersburg Alternative Music Awards 2007. Suddenly the band became exactly - all known, and this was only the beginning.

The very first tour, that was made to support the "Ice" single, was crazy! Gigs in post soviet countries like Ukraine, Byelorussia, Lithuania, Estonia etc., have never had less than 500 supporters.

In spring 2007 Stigmata does a gig with the very well known German band Caliban in Russia. And 2 months later the biggest Russian rock fest "The Wings" puts them on the same stage with Pleymo and Natalie Imbruglia.

Autumn 2007. The second single to the new album is released. "September"... Now Stigmata has already finished their work at the studio and is right about to release their another "first" album - "STIGMATA". The next chapter is about to begin...

October 2007. Stigmata supported world-famous Killswitch Engage and started "On the Wings of the Winds" tour.

2. A hardcore/metal band from New York.
In 2009 Stigmata will celebrate 20 gut-punching years, this hardcore/metal ensemble has defined aural aggression and musical mayhem at the underlying backbone upon with the Upstate New York hard music scene has been built. This is meant literally, not figuratively : Stigmata alumni have gone on to make big musical waves with the likes of Shadows Fall, Murderers Row, Great Day For Up, Dead Rabbits,Crisis, the Clay People, Ill Remembered, and Burning Human among many, many other bands and artists. Since founding his first band Displaced Aggression in the mid 80's, Bob Riley has been the guiding light of the Stigmata franchise. Within two years of its inception, D.A. was forced to change its name to Cranial Abuse as a necessary tactic in order to get back into clubs after the band's allegedly 'too violent' following had gotten them banned. C.A. was to be short -lived as well, for all the same reasons that D.A. had to be dissolved. But as the 80's became the 90's the Riley/Mike Maney outfit became STIGMATA - named after the marks of Christ's suffering that myst eriously appear on some believers' hands, heads, and bodies in the depths of their religious fervor. It was a disturbing name. It was an ominous, confrontational name. Ultimately, it was a lasting, legendary name, given the ever-growing legions of supporters, fans, and collaborators that joined the band in their travels through the nineties. The 90's were when the band became the mighty machine that it is today. Early in the decade saw the release of two hard-to-find CD's, 'The Calling of the Just'and 'The Heart Grows Harder' both on fledgling , now-defunct labels. Without the agony of defeat settling in, the band gained a new lineup (most of whom still remain) and released an epic album for Too Damn Hype Records called 'Hymns for an Unknown God'. This album represented what the right lineup could accomplish. At this time the band consisted of Riley, lead guitarist Mike Maney, bassist Dan Walsh (both of which had been around since the C.A. days), guitarist Jason Sunkes joined in late '92, and drummer Jason Bittner arrived in early 1994. This is the same lineup that exists today with the exception of Walsh, who was replaced by Buddie Armstrong in 1996. Alas, the inevitable lineup shift would come again when Maney decided to leave the band to pursue tattooing full-time in early 1996, but the band pushed onward as a 4-piece releasing the 3-song 'Redemption Songs'demo which eventually landed on Too Damn Hype's East Coast Assault. After this recording, Bittner left for a year in mid 1997 to record and tour with then Metal-Blade recording artists, Crisis. He later returned to the band in 1998 right in time to record the bands live album 'Pain Has No Boundries' which also included studio tracks with drummer Pete Vumbacco who had replaced Bittner during his tenure with Crisis. As we enter the new Millenium, founding guitarist Mike Maney had decided to return to the band in the summer of 1999. This new spark has ignited the band to complete what is to become their strongest effort to this day. The year 2000 will mark the release of their brand new album 'Do Unto Others' followed by a tour of Europe this coming summer. So while clubs may close and records may sell out of So while clubs may close and records may sell out of their initial stock, we all rest secure in the knowledge that one thing will will remain when we, the roaches, and the rats are gone: STIGMATA.
Link to their website:NY Stigmata on Myspace

3. A heavy metal band based in Colombo, Sri Lanka, originally formed in 1999.

Suresh De Silva, Andrew Obeysekara and Tennyson Napolean formed the band in 1999 at S. Thomas' College, Mount Lavinia, where they were schoolmates. They chose the name Stigmata after the 1998 album by Melodic Death Metal band Arch Enemy. The band's style is generally considered a mix hybrid of Progressive and Thrash metal, along with some Death metal influences.

The band released their first EP titled Morbid Indiscretion in 2002, containing the singles The Dying Winter Sleeps, Thicker Than Blood, and the instrumental Andura. Their first major gig was at 'Circle of Life' in 2001, and at the Colombo Rock Cafe. Thicker Than Blood was also the soundtrack at a locally produced drama by the same name. In addition to their originals, at the time the band also covered music by international bands such as Deep Purple, Metallica and Led Zeppelin, as well as bands not so popular in the country at that time such as Iron Maiden, Iced Earth, Judas Priest, Cradle of Filth and System of a Down.

In 2003 drummer Nisho Fernando joined the band following the departure of Dilukshan for higher education. The success of the original singles released upto this point culminated in the band launching their first album, Hollow Dreams in August 2003 on the local Rock Company label, crossing all musical boundaries in the country's English Music industry hitherto starved of originality. The band continued to influence many youth in the country to form their own Heavy Metal bands and bring forth the abundance of talent hitherto suppressed in a society choked by pop and hip hop music.

In 2004, Vije Dhas(Whirlwind) assumed the role of Stigmata's Bass Guitarist filling the void created by the departure of Shehan Gray to Australia. Former drummer Dilukshan temporarily stepped in after Nisho Fernando left the band earlier that year. In 2005 the band found permanent drummer Oshanda Wangeesa(Soul Skinner) and the range of the band was further increased. During 2005 the band also recorded the highly successful acoustic track titled Lucid which made innovative use of the Indian tabla played by percussionist Jananath Warakagoda. This was a prelude to the plugged version of this song which will be released in the bands' sophomore studio album titled Silent Chaos Serpentine was released in February 2006. Drummer Ranil Senarath (Picasso Recess)joined the band in August 2005 after the departure of Ozzy.

5. One of the aliases and labels of german techno producer Chris Liebing. To get a complete listing of Stigmata Releases check on discogs:link.

6. There is also a Austian progressive power metal band that started out as Stigmata, later changing their name to Stigmata IV and then Stygma IV

7. Benn Jordan produced one unreleased album under the pseudonym 'Stigmata'.

8. The early monniker of the melodic death metal band Blinded Colony from Sweden.