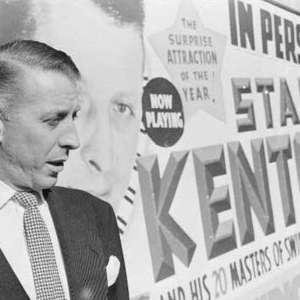 Stanley Newcomb Kenton (December 15, 1911 August 25, 1979) led a highly innovative, influential, and often controversial American jazz orchestra. In later years he was widely active as an educator. Origins Stan Kenton was born in Wichita, Kansas, and raised first in Colorado and then in California. He learned piano as a child, and while still a teenager toured with various bands. In June 1941 he formed his own band, which developed into one of the best-known West Coast ensembles of the Forties.

Stan Kenton was born in Wichita, Kansas, and raised first in Colorado and then in California. He learned piano as a child, and while still a teenager toured with various bands. In June 1941 he formed his own band, which developed into one of the best-known West Coast ensembles of the Forties.

Kenton's musical aggregations were decidedly "orchestras." Sometimes consisting of two dozen or more musicians at once, they produced an unmistakable Kenton sound--as recognizable as that of the bands of Glenn Miller, Duke Ellington, or Count Basie. So large an orchestra was able to produce a tremendous, at times overpowering, volume in the dance and concert halls of the land; among musical conservatives it developed a reputation for playing strange-sounding pieces much too loudly, and indeed one comical MC introduced Stan Kenton as "Cant Standit."

A Kenton specialty was Afro-Cuban rhythm, as exported to North America by such bandleaders as Machito (whose brass and reed sound, in turn, began to show the influence of Kenton). Translated into the Kenton idiom, however, the Latin rhythms might be scored for a full panoply of percussion instruments: tympani, bongos, conga, timbales, claves, and maracas. This component of Kenton's work may be heard on the 1947 recording "Machito" and on the album Cuban Fire, still in print after more than fifty years of ceaseless change in popular music.

Many of Kenton's band arrangements were written by Kenton himself, as well as other composers and arrangers such as Gene Roland, Pete Rugolo, W. A. Mathieu, Johnny Richards, Lennie Niehaus, Gerry Mulligan, Hank Levy, Bill Russo, Dee Barton, Bill Holman, Shorty Rogers, Ken Hanna, and Bob Graettinger (ref. his formidable but fascinating "City of Glass"). The music, which could be intensely dissonant, made use of powerful brass sections and unconventional saxophone voicings that showed Kenton's love of experimenting, reflected in the names he gave his ensembles: "Innovations Orchestra," "Neophonic Orchestra," and "Mellophonium Orchestra." Kenton's theme song from the early days to the last was called, significantly, "Artistry in Rhythm." It was owing in part to Kenton's ambitious musical nomenclature that many critics dismissed his work as mannered and pretentious. But apart from recording a few dance-band albums (Kenton's men could play standards beautifully), he avoided compromising his idea of jazz to please either critics or public.

Kenton played in the 1930s in the dance bands of Vido Musso and Gus Arnheim, but he was born to be a leader. In 1941 he formed his first orchestra, which later was named after his theme song "Artistry in Rhythm." A decent Earl Hines-influenced pianist, Kenton was much more important in the early days as an arranger and inspiration for his loyal sidemen. Although there were no major names in his first band (bassist Howard Rumsey and trumpeter Chico Alvarez come the closest), Kenton spent the summer of 1941 playing regularly before a very appreciative audience at the Rendezvous Ballroom in Balboa Beach, CA. Influenced by Jimmie Lunceford (who, like Kenton, enjoyed high-note trumpeters and thick-toned tenors), the Stan Kenton Orchestra struggled a bit after its initial success. Its Decca recordings were not big sellers and a stint as Bob Hope's backup radio band was an unhappy experience; Les Brown permanently took Kenton's place.

By late 1943 with a Capitol contract, a popular record in "Eager Beaver," and growing recognition, the Stan Kenton Orchestra was gradually catching on. Its soloists during the war years included Art Pepper, briefly Stan Getz, altoist Boots Mussulli, and singer Anita O'Day. By 1945 the band had evolved quite a bit. Pete Rugolo became the chief arranger (extending Kenton's ideas), Bob Cooper and Vido Musso offered very different tenor styles, and June Christy was Kenton's new singer; her popular hits (including "Tampico" and "Across the Alley From the Alamo") made it possible for Kenton to finance his more ambitious projects. Calling his music "progressive jazz," Kenton sought to lead a concert orchestra as opposed to a dance band at a time when most big bands were starting to break up. By 1947 Kai Winding was greatly influencing the sound of Kenton's trombonists, the trumpet section included such screamers as Buddy Childers, Ray Wetzel, and Al Porcino, Jack Costanzo's bongos were bringing Latin rhythms into Kenton's sound, and a riotous version of "The Peanut Vendor" contrasted with the somber "Elegy for Alto." Kenton had succeeded in forming a radical and very original band that gained its own audience.

In 1949 Kenton took a year off. In 1950 he put together his most advanced band, the 39-piece Innovations in Modern Music Orchestra that included 16 strings, a woodwind section, and two French horns. Its music ranged from the unique and very dense modern classical charts of Bob Graettinger to works that somehow swung despite the weight. Such major players as Maynard Ferguson (whose high-note acrobatics set new standards), Shorty Rogers, Milt Bernhart, John Graas, Art Pepper, Bud Shank, Bob Cooper, Laurindo Almeida, Shelly Manne, and June Christy were part of this remarkable project, but from a commercial standpoint, it was really impossible. Kenton managed two tours during 1950-1951 but soon reverted to his usual 19-piece lineup. Then quite unexpectedly, Kenton went through a swinging period. The charts of such arrangers as Shorty Rogers, Gerry Mulligan, Lennie Niehaus, Marty Paich, Johnny Richards, and particularly Bill Holman and Bill Russo began to dominate the repertoire. Such talented players (in addition to the ones already named) as Lee Konitz, Conte Candoli, Sal Salvador, Stan Levey, Frank Rosolino, Richie Kamuca, Zoot Sims, Sam Noto, Bill Perkins, Charlie Mariano, Mel Lewis, Pete Candoli, Lucky Thompson, Carl Fontana, Pepper Adams, and Jack Sheldon made strong contributions. The music was never predictable and could get quite bombastic, but it managed to swing while still keeping the Kenton sound.

Critics of Kenton have not limited their attacks to his music only. In 1956, when the band returned from its European trip, the Critics Poll in Down Beat reflected victories by Negroes in virtually every category. The Kenton band was playing in Ontario, Canada, at the time, and Stan dispatched a telegram which brought near apoplexy to critic Leonard Feather.

The telegram lamented "a new minority, white jazz musicians," and stated Kenton's "complete and total disgust [with the] literary geniuses of jazz." Feather, alone of all the critics, took up his cudgel to answer and attack Kenton. In the October 3, 1956, issue he wrote an open letter which distorted Kenton's words, and in the heat of anger (though he claimed it was sorrow) he questioned Kenton's racial views, his alleged disparagement of Negro leaders like Duke Ellington, Count Basie and Dizzy Gillespie. Feather inferred that Kenton's failure to win the Critics Poll was the major reason for the complaint; that there had been a prejudice for many years and now it had to be expressed; that Kenton had not hired enough Negro musicians over the years.

All points except the last were based on conjecture, and events preceding and following Feather's complaint have shown how ridiculous they were. The latter point was based on a poor or prejudiced memory of the writer, for in noting the presence of only a handful of Negroes in Kenton's band he overlooked at least five times as many others who have played with or been aided by Kenton. (The night that Kenton sent the telegram there were two Negroes playing in the trombone section.) Not least among these would be Charlie Parker and, particularly, Art Tatum, who was given more exposure on a Kenton sponsored tour than he ever received elsewhere.

In reality, every musician who has ever played with Kenton will tell you that he has been a staunch defender of the Negro's place in jazz and that he has fought just as violently against the Crow?Jim concept of some Negroes that jazz is their music alone. As critic Ralph J. Gleason wrote, also in Down Beat, Feather's verdict was passed on Kenton ". . without, unfortunately, any public statement from the only musicians really in a position to know." Again, unfortunately, it took critic Feather four years to realise his error, for it was not until August, 1960, that he took stock and tried to clear the scene.Kenton later was asked if Feather had apologised for his article before the jazz world in Down Beat. The answer was: "Yes: I think it was on the back page of the Pittsburg Inquirer ." Kenton was pointing to the irony that Feather had created a great tempest, and no matter how apologetic the critic would be he had created great ill?feeling, and there is still much of that prejudice?in?reverse by Negro musicians toward Stan. Nearly three years before this, in the December 16, 1953, issue of Down Beat, critic Nat Hentoff had written that ". . . Stan is as free from prejudice of any kind as any man I know,"

Kenton's last successful experiment was his mellophonium band of 1960-1963. Despite the difficulties in keeping the four mellophoniums (which formed their own separate section) in tune, this particular Kenton orchestra had its exciting moments. However from 1963 on, the flavor of the Kenton big band began to change. Rather than using talented soloists, Kenton emphasized relatively inexpensive youth at the cost of originality. While the arrangements (including those of Hank Levy) continued to be quite challenging, after Gabe Baltazar's "graduation" in 1965, there were few new important Kenton alumni (other than Peter Erskine and Tim Hagans). For many of the young players, touring with Kenton would be the high point of their careers rather than just an important early step. Kenton Plays Wagner (1964) was an important project, but by then the bandleader's attention was on jazz education. By conducting a countless number of clinics and making his charts available to college and high-school stage bands, Kenton insured that there would be many bands that sounded like his, and the inverse result was that his own young orchestra sounded like a professional college band! Kenton continued leading and touring with his big band up until his death in 1979.