Spirit Of The West 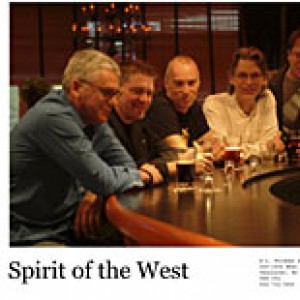 Spirit of the West are a Canadian folk rock band, who were popular on the Canadian folk music scene in the 1980s before evolving a blend of hard rock, Britpop and Celtic folk influences which made them one of Canada's most successful alternative rock acts in the 1990s. The band began in 1983 as a Vancouver-based folk trio called Evesdropper, consisting of John Mann, Geoffrey Kelly and J. Knutson. They soon changed their name to Spirit of the West, and independently released a self-titled album in 1984 before signing to Stony Plain Records, an Edmonton, Alberta roots music label.

The band began in 1983 as a Vancouver-based folk trio called Evesdropper, consisting of John Mann, Geoffrey Kelly and J. Knutson. They soon changed their name to Spirit of the West, and independently released a self-titled album in 1984 before signing to Stony Plain Records, an Edmonton, Alberta roots music label.

Stony Plain released Tripping Up the Stairs in 1986. Following that album, Knutson left the band and was replaced by Hugh MacMillan.

1988's Labour Day was the band's first major success, spawning the popular single "Political" and making the band a major name on the folk festival circuit. After that album's tour, MacMillan took a temporary hiatus from the band. He was replaced by Daniel Lapp and Linda McRae, but returned before the band's next album was recorded. When MacMillan returned, Lapp left the band but McRae stayed on. (As a result, Lapp never actually appeared on a Spirit of the West recording. He pursued a solo career, however, releasing a number of albums of experimental jazz/folk/electronic fusion.)

On the strength of "Political", Warner Brothers Records signed the band, and Stony Plain released a compilation, Old Material 1984-1986 in 1989. In 1990, the band's major label debut, Save This House was released, spawning the singles "Save This House" and "Home For a Rest" (which is still considered a classic frosh week anthem at universities across Canada.)

Following that album, the band toured England with The Wonder Stuff, and decided to bring in a drummer and experiment with a more rock-oriented sound. Vince Ditrich was brought in, and the band's 1991 album, Go Figure, was the result.

Although the album retained the band's folk influences, it was more hard rock than any of the band's previous efforts, and this proved controversial among the band's fans. The album included a rock rendition of "Political", and at one show in London, Ontario, the audience presented the band with a petition demanding that they play the original version of that song. Despite the controversies, however, it became the band's mainstream commercial breakthrough, and won them many new fans in the alternative rock scene.

In 1993, the band released their most successful album, Faithlift, and scored their biggest hit single, "...And if Venice is Sinking". 1995's Two Headed, in turn, garnered significant airplay for the single "Tell Me What I Think". However, the album was not as successful on the charts, or as critically hailed, as its predecessor.

In 1996, the band performed two shows with the Vancouver Symphony Orchestra. The band included some of their hits in these shows, but also included an album's worth of songs written specifically for the occasion, and the new songs were released as Open Heart Symphony that year. (Some of the hits performed at those shows are available on the compilation Hit Parade.) Also in 1996, McRae left the band amicably to pursue a solo career, performing her last show on New Year's Eve of that year. She went on to release a solo country album in 1997, and then formed the alternative country band Cheerful Lonesome.

The remaining members recorded 1997's Weights and Measures as a four-piece, working with members of The Wonder Stuff, Capercaillie, Fairport Convention and Jethro Tull to round out the studio effort, and added Tobin Frank for their concert tour. However, with the music industry's emphasis having shifted by this time toward more mainstream pop-oriented performers, Warner put little effort into promoting the album, and dropped the band from their roster after the tour.

After Weights & Measures the band took a hiatus, although they continued to perform live, and remained a popular concert draw. During the hiatus, Mann, Ditrich and Kelly all released solo albums, Mann pursued acting roles, MacMillan worked as a session musician and producer, and Kelly and Frank recorded with The Paperboys.

In 2005, "Home For a Rest" was named the 22nd greatest Canadian song of all time on CBC Radio One's 50 Tracks: The Canadian Version.

Tripping Up The Stairs (Vinyl)