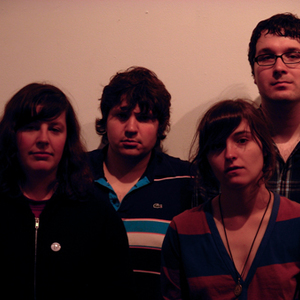 While many efforts have been made to describe the music of Speck Mountain, one must jump in headfirst on their own to fully absorb the band's textured and melodic sound. Deep within their sonic landscape is something innately recognizable??maybe it calls to mind a dozy record player hazing over '60s soul, a dream, a scrap of a memory cloaked in that fuzzy atmosphere. By their own definition, ?ambient soul? seems the most apt. It is a sound that surrounds us, warm and round??a sound that seems like it was always there.

The same could be said of how the band began. Self-described ?musical soul mates,? Marie-Claire Balabanian and Karl Briedrick appear to have lived out parallel lives in the suburban sprawls of Los Angeles and Detroit respectively before finding each other in New York City in the early-2000s. Now based in Chicago, the duo share song writing duties in the formative stages??Balabanian doles out her soulful vocals and Briedrick crafts rich sonic textures in bass and guitar in the final cuts.

For their third album together Badwater, the creative partners have added drummer Chris Dye, previously of Chin Up Chin Up, and Linda Malonis, a former pentacostal church pianist turned drone-rock organist.

Bonded by an almost mystical connection and a musical intuition Balabanian and Briedrick have cultivated together, Speck Mountain will release Badwater on Carrot Top Records in January 2013 with tour dates to be announced.