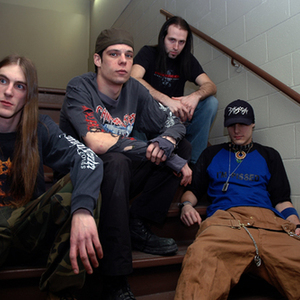 Around the end of the 1990's, in a quiet Quebec town called Gatineau, two young guitarists joined their talents and began composing grinding metal riffs. Emerging from the era of such old school bands as Metalica, Pantera and Sepultura into the darker world of Cannibal Corpse and Suffocation, they became the pillars of a band originally called Morbidity. Those two guys are named Francis Bock and Christian Villeneuve.

In the following year a bassist, Pierre-Yves Paquet (known to most as P-5) joined in to create first Carnage and then Sordid with the two guys. Along the course of Frank's and P-5's senior year at Le Carrefour high school, they met a talented drummer, Andr? B?lisle, who would put the first rumbling bass drums and rattling snares over the few songs Sordid had back then. And it was at the very end of Frank's, Dre's and P-5's high school years, in June of 2001, that Sordid took the stage for the first time, in Le Carrefour's auditorium. The band did not have a singer yet (the school administration would never have allowed it, anyway) so that show was instrumental, and a success.

The following year would see some of the most creative periods (and some of the craziest parties) of Sordid and would overall mean very enthusiastic times for its members. It was also during that year that Jean-Manuel Bock, Frank's older brother, started pouring his heart and soul in the band's management (and still does, God bless him!) After the second show, also instrumental and also at Le Carrefour, Sordid embarked on a serious search to find it's own voice. That search ended the moment Christian Therien auditioned for the job. And a young band was to know it's greatest success yet: it's first show with a finally complete lineup.

The adventures of a rising local metal band followed over the next few years, as the guys hit the road to places like Montreal, Quebec, Pembroke, Rouyn-Noranda, Jonqui?re and of course back home, in Gatineau, Hull and Ottawa. The last pages of the story up to now have been turned only lately, as Christian Villeneuve left the band and the other guys signed a contract with Disconcert Music, an emerging new record label directed by St?phane Par?, singer of Quo Vadis. The first Sordid full length album, entitled "Valley of Punishment", is currently on the way. With a new guitarist named Pascal Jobin (or Paco) and a coming first release, Sordid is ready to take it's next step into the metal industry and to show guys how brutal it can get!

Armed To Their Grinning Teeth