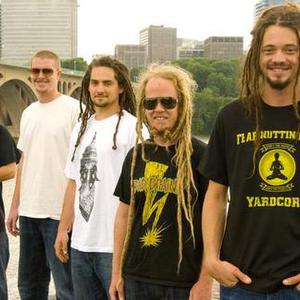 Lead singers Jacob Hemphill (vocals, guitar) and Bob Jefferson (bass) met in first grade in Virginia, shortly after Jacob had returned from living in Africa with his family. The two instantly became best friends, and in middle school found a common love for hip hop and rock music. Throughout middle and high school, they met Patrick O'Shea (keyboards), Ryan Berty (drums), and Ken Brownell (percussion) ? who would later form SOJA.

During this period, reggae music was becoming an addiction for the budding musicians. Lead singer Jacob shares, ?We loved rock and hip hop, but there was something missing in the message. Even with our favorite artists, you would get one song that hit home and touched you, then three that were about nothing. With our favorite artists in the reggae genre, Bob Marley and Peter Tosh, they were singing about something beautiful that truly mattered in every song. We never really got over it.?

SOJA's first album was recorded independently with renowned sound engineer Jim Fox. Jacob notes, ?Jim told us that he would work with us and so we could afford to make our first record, and when we ran out of money he started making up ?discounts.' It was awesome. I asked him why a while back, and he said ?I didn't want to see a good thing stop.' What was even crazier was at the time he wasn't working with bands that were from the US, just Jamaican artists. Big ones like Black Uhuru, Israel Vibration, Burning Spear, Don Carlos, and Inner Circle. Jim worked with us independently and recorded, mixed, and mastered the whole thing. That is how it all started.? SOJA's first album, ?Soldiers of Jah Army EP? was released at the beginning of 2000.

In 2002, SOJA released their first full-length album, ?Peace in a Time of War.? Though the band was young, the album had hits. ?True Love,? ?Rasta Courage,? and ?Peace in a Time of War? were the first songs to bring the band strong attention nationally and internationally and cement them in the reggae world. Tours became larger, their fan base expanded rapidly and they grew up smart in the independent music industry. In 2006, the band released ?Get Wiser,? their second full-length album. The album was a break through for the band, as they explored the duality in their music, combining beautiful, longing melodies with hard drum and bass, and layered with intricate lyrics. SOJA created their musical style with a new complexity and depth that they would carry with them to their future albums. Jacob shares, ?When you listen to an artist you can either have a series of one liners, or you can tell a story with your music. We set out to tell a story, it's like poetry ? dancing around an entire theme, but never putting a period on anything. It is like the two sides of a coin, but you can see them at the same time.? ?Get Wiser? debuted in the Top 10 Reggae Albums on iTunes and has remained in the top 100 since its release. Singles off the album including ?Open My Eyes, ?You Don't Know Me,? and ?Can't Tell Me? remain in heavy rotation on college radio across the United States, and have also received major radio play internationally in places such as France, Brazil, Argentina, Puerto Rico, St. Maarten, Costa Rica, Mexico, Venezuela, Guam, and Tahiti. The success of ?Get Wiser? took the band on three years of intense touring nationally, and internationally. In 2008 SOJA released their EP ?Stars and Stripes.? They blended new sounds and new rhythms with their existing reggae sound, growing into what SOJA was becoming. The EP contained three new songs plus remixes and new versions of popular songs. In early 2009 the band released the documentary DVD ?SOJA Live in Hawaii: A Marc Carlini Film,? showcasing the power and energy of their 2008 Hawaiian tour which included four islands, five cameras, four shows, and everything in between.

Now, SOJA is ready to unleash their third full-length album ?Born in Babylon? - the culmination of all past efforts on their label DMV Records. Set to be released August 25, 2009 exclusively on iTunes, ?Born in Babylon? focuses on telling the same roots story that reggae artists have been singing about for decades, but their way, from the flip perspective of kids who grew up not in poverty, but in a government saturated community in Arlington, Virginia, across Mason-Dixon Line from the White House. SOJA shares about their new album, ?This is the album we've been wanting to make for ten years. At first we were hard-core old school, then we got new school and inventive. This is what we've learned from all that. ?Born in Babylon' is hard roots drum and bass, big wide guitar and vocal melodies, and two and three sided lyrics, with two and three sided messages.? ?

For the rest of 2009 and moving into 2010 ? SOJA plans on touring the United States extensively while promoting ?Born in Babylon? with mainstay horn players Hellman Escorcia (saxophone) and Rafael Rodriguez (trumpet). Currently, SOJA averages 150 shows a year and the group has toured every major city in the US and internationally throughout Canada, Puerto Rico (avg 2500), Brazil (avg 4000), Argentina, Uruguay, New Caledonia (16,000 in attendance) Palau, Saipan, Guam (avg 3500), Hawaii (avg 2,000 on each island), Sweden, Switzerland, France, Portugal (avg 2000) and Holland. The band has also shared the stage with notable artists such as Citizen Cope, Matisyahu, Ben Harper, Slightly Stoopid, Damian Marley, Govt Mule, Umphrees McGee, and Steel Pulse to name a few.

In addition to their new music and touring, the band remains committed to creating real music, music that cant be ignored. Jacob pauses, ?Bob Marley's fans all feel like when he is singing a song, it's to them. You could be from anywhere, any situation, rich, poor ? it doesn't matter; the song is directed at them. He speaks to you, the love songs too. That is what we are after. Not one side of the story, the whole thing, both sides of the coin. Just listen to ?Born in Babylon.'?


disambiguation:
If you're looking for a US act:
http://www.last.fm/music/Soldiers+of+Jah+Army

Over the years, the Washington, D.C. music scene has become best known for its hardcore (Minor Threat) and go-go (Trouble Funk) alumni, but as evidenced by the great Bad Brains, reggae has been represented as well. SOJA has risen to the forefront, picking up right where the Brains left off ? creating their own blend of conscious roots music entwined with the traditional rhythms of reggae, it ?comes across with passion and depth.? (Washington Post '06)

That said, SOJA is not that easy to define. Although they are rooted in reggae, they are not limited to it; their fan-base reflects this with a very diverse population. The music includes and embraces all walks of life - it has no prejudice ? it is for everyone. The band grew up listening to reggae, hip-hop, and rock. In their sound, reggae became the predominate influence because it is dedicated to a real message and promotes revolution.

The group, which includes a pair of lead singers who also pull double duty - Jacob Hemphill (guitar) and Bob Jefferson (bass) ? as well as Patrick O'Shea on keyboard, percussionist Ken Brownell, and drummer Ryan Berty, originally came together in 1997. Since 2000, the quintet has issued three full length albums and one EP ? their latest, ?Get Wiser,' is their third for the group's own label, Innerloop.

Hemphill explains the meaning of the album's title. ?The new album is called ?Get Wiser' ? that's the idea. We as a society tend to have blinders on. We are trying to uplift peoples' consciousness by breaking down what makes us blind. To do this, we got to bring back truth. People get wiser.?

?Every song is different of course.? Hemphill continues, ?I found music to be a way to express myself - through my life I've never been able to express myself well in conversations, but I can do it through music. It's like my way to talk.?

Ever the road warriors (SOJA averages 150 gigs per year), the group will be supporting their latest release with a healthy amount of live dates this year on the ?Get Wiser Tour?. With such a list of accumulated live dates, a specific high point is hard to pin down, but Brownell remembers a particular performance. ?One of the shows that remains in the front of my mind was playing in Guam for the first time for nearly 6,000 fans. That was an amazing experience.?

With SOJA calling their own shots, ?Get Wiser' proves that the band's message and music will only continue to grow stronger with each successive release. In support of their latest album, ?Get Wiser?, SOJA is embarking on a journey around the world.

Amid the Noise And Haste

Dub In A Time Of War

Peace In A Time Of War