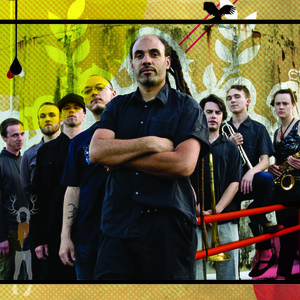 John Brown's Body's ?Future Roots? uses reggae as a foundation, but incorporates dub, drum and bass, dancehall, hip hop and other musical experiments and exploration to create a sound both timeless and forward. However it's defined, it's got people buzzing about this progressive band from Boston and Ithaca, NY. The New York Daily News called them ?reverent and revolutionary.? Their latest album, Amplify, debuted at #1 on Billboard's Reggae Chart.

The 8-piece band's killer live show has super heavy rhythms, a three piece horn section, air tight drum and bass and ?the most gorgeous melodies in all of modern reggae music? [All Music Guide], all backed by a dubbed-out sound engineer.

?Amplify is a daring record with an overall vision to avoid the rut that North American reggae bands often find themselves unable to climb out of?the sound of a band recreated, retooled and refreshed.? - Exclaim Magazine [Canada]

?JBB is an eight-piece outfit that delivers some of the most forward-thinking reggae music in the world today.? - LA2DAY

?Amplify is some of the most invigorating, progressive reggae released in some time.? - All About Jazz

?Instead of relying on traditional foundations to create their songs, Martin takes the band's old world foundation and builds a complex and multi-genre crossbreed that places the band squarely on the forefront of the world music arena.? - Sentimentalist Magazine

??the band's energy is soaked up and spread out in all the right places, never allowing Amplify to slow down and catch its breath. A heck of an achievement?? - Glide Magazine

?Their stage presence is something to be witnessed. No member goes unnoticed. The bassist moves to his steady beats. A focused drummer? bouncing keyboardist? and a grooving guitar player make up the colorful background. Adding to all that are three intense horn players moving and grooving up front along with an emotive? charismatic lead singer leaving no shortage of visual stimulus onstage.? - State Of Mind

Spirits All Around Us