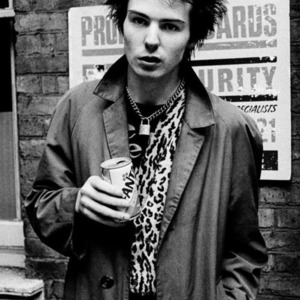 John Simon Ritchie-Beverley (May 10, 1957 ? February 2, 1979), better known as Sid Vicious, was an English punk rock musician and member of the band the Sex Pistols. He died of a heroin overdose at the age of 21. In November 1977 Ritchie met American groupie Nancy Laura Spungen and they immediately began a relationship (Spungen had come to London looking for Jerry Nolan of The Heartbreakers). She was a heroin addict, and inevitably Ritchie, who already believed in his own "live fast, die young" image, soon shared the dependence.

In November 1977 Ritchie met American groupie Nancy Laura Spungen and they immediately began a relationship (Spungen had come to London looking for Jerry Nolan of The Heartbreakers). She was a heroin addict, and inevitably Ritchie, who already believed in his own "live fast, die young" image, soon shared the dependence. Although deeply in love, their often violent and rocky relationship had a disastrous effect on the Sex Pistols. Both the group and Ritchie visibly deteriorated during their 1978 American tour. The Pistols broke up in San Francisco on January 14 during a concert at the Winterland Ballroom when Lydon walked off the stage. Ritchie left shortly afterwards, and with Spungen acting as his "manager" he embarked on a solo career, during which he performed with musicians including Mick Jones of The Clash, original Sex Pistols bassist Glen Matlock, Rat Scabies of The Damned and the New York Dolls' Arthur Kane and Jerry Nolan.

Meanwhile Ritchie and Spungen had become locked in their own world of drug addiction and self-destruction. Interview footage shows the couple attempting to answer questions from their bed: Spungen is barely coherent while Ritchie lapses in and out of consciousness. He also came very close to death following a heroin overdose and was hospitalised for a time.

On the morning of October 12, 1978 Ritchie allegedly awoke from a drugged stupor to find Spungen crumpled dead on the bathroom floor of room 100 in the Hotel Chelsea in New York. She had received a single stab wound to her abdomen and apparently bled to death. Vicious was arrested and charged with her murder although he said he had no memory of having done so. However, he later claimed to have "killed her because I'm a dirty dog." There are wholly unsupported theories Spungen was murdered by someone else, usually said to be one of the two drug dealers who visited the apartment that night.

After appearing in court over Spungen's death, Ritchie was briefly interviewed by a tabloid journalist. He was shaking slightly and appeared sober, morose, and withdrawn:

Interviewer: Where would you like to be?
Ritchie: Under the ground.
Interviewer: Are you serious?
Ritchie: (quietly, and sad) Yeah.

Bail of $50,000 was put up by Virgin Records at McLaren's request, and in February 1979 a party to celebrate his release was held at the home of his new girlfriend Michelle Robinson. During his time at Rikers Island prison, Ritchie had undergone drug rehabilitation therapy and was supposedly clean. However at the party he obtained some heroin from his mother, and was discovered dead the following morning, having taken a large overdose. Speculation has persisted that Ritchie, unable to live without his beloved Nancy, took his own life. He wrote the following poem about her:

You were my little baby girl,
And I shared all your fears.
Such joy to hold you in my arms
and kiss away your tears.
But now you're gone, there's only pain
and nothing I can do.
And I don't want to live this life,
If I can't live for you.
To my beautiful baby girl.
Our love will never die...

After Ritchie's death, his mother phoned Deborah Spungen, Nancy's mother, to request that he be buried next to her, but Deborah Spungen declined. There are several myths about what happened to Ritchie's remains but one of the most persistent is that late one night, "Sid's mother jumped the graveyard fence where Nancy was buried and scattered his ashes over his beloved for them to be together for all time."

According to The Guardian, "It's more likely that Ma Vicious arrived back at Heathrow with his remains. Malcolm McLaren claims she knocked them over in the arrivals lounge; hence the fanciful myth that Sid's essence still circulates, wafting through the air vents and moving among the travellers." .

Sid Sings, a solo album, was released posthumously by Virgin Records. This was mostly a collection of cover versions of rock 'n' roll numbers such as "C'mon Everybody" and "Something Else" by Eddie Cochran along with material by Iggy Pop and Johnny Thunders and a rendition of the Paul Anka / Frank Sinatra standard "My Way". Striking footage of Vicious performing this song in Paris provides the closing sequence for Julien Temple's film The Great Rock 'n' Roll Swindle.