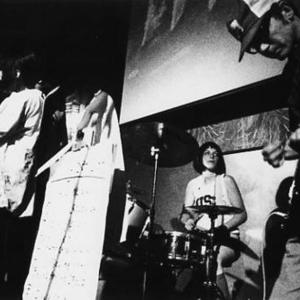 Shrag are a post-punk-influenced indiepop band based in London and Brighton. To date the band have released two albums, six singles and two download singles on the Where It's At Is Where You Are label. FORMATION AND EARLY YEARS Shrag's first release was the home-recorded song Punk Grammar, which debuted on Under The Beach, A Heart Attack - a 2003 compilation CD and fanzine of Brighton bands put together by local club night It Came From The Sea and featuring a foreword by then-Brighton-based music critic Everett True.

Shrag's first release was the home-recorded song Punk Grammar, which debuted on Under The Beach, A Heart Attack - a 2003 compilation CD and fanzine of Brighton bands put together by local club night It Came From The Sea and featuring a foreword by then-Brighton-based music critic Everett True. The fanzine tells the story of Shrag's formation in a comic book format. At the tail-end of a party in Brighton's Sussex Heights residential tower block, the reminaing five revellers - made up of local DJs, promoters, academics and musicians - decide to start a band, named Sussex Heights Roving Artists Group.

Contracting the band name to Shrag, the five members, Helen King (vocals), Bob Brown (guitar and vocals), Nick Hills (keyboards and vocals), Russell Warrior (bass guitar) and Leigh Anne Clarke n?e Walter (drums and vocals), played their first concert on 21 July 2003 at Brighton's Hanbury Ballroom. Early performances of the group were characterised by onstage gimmicks such as fancy dress (wearing wedding dresses or dressing as librarians) or creating art as the band played, and a generally lighthearted spirit. Early songs were often humorous in tone and content, sometimes describing imaginary scenarios involving the band and their friends, or playing heavily on puns. The songs often included spoken word segments, and on Punk Grammar even a comic rap.

Following the departure of Nick Hills to concentrate on his band Coin-Op, and the temporary relocation of drummer Leigh Anne to her native Canada, the band went on hiatus in early 2004. When they regrouped in 2005 with Blue Minkies guitarist and vocalist Steph Goodman on keyboards and vocals the band began working on the harder, punkier songs which would eventually comprise their debut album.

WHERE IT'S AT IS WHERE YOU ARE AND DEBUT ALBUM

Where It's At Is Where You Are label boss John Jervis was impressed with the revitalised Shrag's live performances and offered them a unique deal - the opportunity to release a series of double a-side 7" singles which would then be collated into a CD album, mixed by former Morrissey drummer and Love Is All producer Woodie Taylor.

The first in this series was Pregnancy Scene/Mark E Smith in June 2006, which won the band the favour of indie-focused magazines like Artrocker. Other singles from this series such as Hopelessly Wasted and Different Glue/Lost Dog would be reviewed positively by more mainstream outlets such as The Guardian Guide, and Shrag would go on to complete national tours with The Cribs and The Thermals, among others, and record several BBC radio sessions.

The compiled debut album itself would not arrive until early 2009, by which point the band had already begun recording tracks for its intended follow-up. Titled simply 'Shrag', some tracks on the album retained the humour of the group's early days - Talk To The Left was a put-down to a verbose lovemaker, and Intelligent Theft was a fun story about shoplifting teenagers - but newer songs showed a more vitriolic side to the band, Helen's lyrics dealing angrily with break-ups, abusive friendships, and even bereavement.

The Shrag album proved a hit with critics from Uncut magazine to The Sunday Times, and a 'proper' follow-up album was scheduled for release later in 2009. Stand-out track Hopelessly Wasted was also included in the Rough Trade Indiepop 09 compilation.

Although Shrag had always claimed to be influenced more by post-punk and riot grrl than the indiepop with which they were rapidly becoming associated, performances at the Indietracks festival and regular live appearances at London-based indiepop club nights such as Twee As Fuck showed that Shrag had been embraced wholly by the indiepop scene. The new songs that the band were showcasing in their live sets around this time featured a much more melodic, less aggressive sound that some commentators found reminiscent of legendary indiepop bands like Comet Gain or Talulah Gosh.

Shrag continued to build a growing fanbase with steady touring, both supporting the likes of The Pains Of Being Pure At Heart and headlining their own tours, but ongoing medical problems caused drummer Leigh Anne to be replaced for many live performances by Medicine & Duty drummer Andy Pyne, who in 2009 became a permanent member of the band.

Consequently, many of the tracks Shrag had originally intended to appear on their forthcoming album were either shelved or rerecorded by the new line-up, while new songs that the band began working on saw them turning away from the lighter, more poppy original template for the album into much darker and more introspective territory.

The first single from Life! Death! Prizes!, Shrag's second album, was Rabbit Kids, an anthemic love song which won the band significant mainstream radio play and plaudits in Pitchfork, All Music Guide and Drowned In Sound. Musically the band had concentrated their musical range (which had previously drifted from B-52s-esque guitar pop to synth-led ballads) into more concise, driving rock songs, although a string section on the epic album closer Coda and the waltzy Furnishings showed a softer, more vulnerable side to the band. The album's centrepiece, The Habit Creep, meanwhile, is a harrowing spoken word piece depicting an individual unravelling psychologically, and the download single Ghosts Before Breakfast represented the noisier, artier influences of bands like Prolapse and Life Without Buildings.

Released in October 2010, Life! Death! Prizes! was equally as acclaimed as it's predecessor and provided a platform for the band to perform in New York at the CMJ Music Marathon, and to record a BBC Radio One session at Maida Vale studios.

Shrag are currently writing material for their third album, set to be produced by Andy Miller (Life Without Buildings, Mogwai, Songs : Ohia, etc), and will be contributing tracks to forthcoming tribute albums for their heroes The Nightingales and Prolapse. Bob and Helen have also contributed backing vocals to Comet Gain's Howl Of The Lonely Crowd album, released 23 May 2011.