Betty and the Werewolves 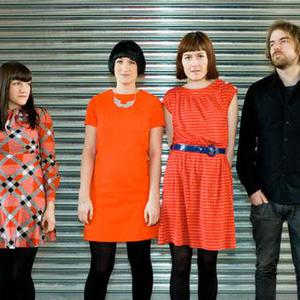 From Virginia Woolf & Grandma Wolf - they sing ditties about falling in love with David Cassidy & strange encounters on night buses, shouting all the while and scuffing up their party shoes.

They signed with Damaged Goods, after a gig supporting Holly Golightly at the 100 Club (London) & set-off to Gizzard studios (East London), to record their first two singles (Euston Station & David Cassidy), then after a year or so of writing songs they recorded this album with Jon at Onecat studios (Brixton), after a tip from Amelia Fletcher.

They recently played both nights at the Camden Crawl & and played The Indietracks festival in 2010.
A new single Paper Thin is out, with two live tracks on the b-side. http://www.myspace.com/bettyandthewerewolves