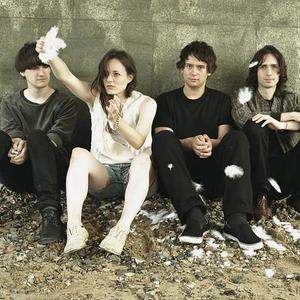 FREE DOWNLOADS AVAILABLE AT WWW.STRICKENCITY.COM Stricken City play pop songs lingering on lovers and tramps jumping between places and pictures... When Iain Pettifer (guitars) first met Rebekah Raa (vocals/keys), they were wearing exactly the same clothes. ?How could they not form a band then??, you'd think, only the pair were actually in high school, in a math class. Nonetheless, as painstaking algebra lessons repeated themselves every week...

When Iain Pettifer (guitars) first met Rebekah Raa (vocals/keys), they were wearing exactly the same clothes. ?How could they not form a band then??, you'd think, only the pair were actually in high school, in a math class. Nonetheless, as painstaking algebra lessons repeated themselves every week, it soon became apparent that while Raa and Iain couldn't have been less bothered about square roots, their love for romantic guitar music couldn't have been better suited.

It was a couple of years later that the pair first began writing together, sparked by Raa's boredom at university, which resulted in the singer spending her student loan on a guitar and an 8-track recorder. Originally the plan was for Stricken City to consist of just two, until they quickly decided that something was missing and pulled together a full lineup.

While Goldsmiths music student Mike Hyland is the band's newest member ? having taken up bass duties in August of this year and playing his first gig for the band in the back of a taxi ? Kit Godfrey has been Stricken City's long-standing drummer since 2006. ?We liked him straight away because he was a drummer called Kit,? says Rebekah, ?there was no need for an audition.?

Drawing on influences from The Slits, Life Without Buildings and Young Marble Giants, the band's new wave, spiky, jangling pop found them being asked to play both London's TDK festival and Vice Magazine's Tales Of The Jackalope in 2007, as well as earning them support slots with Mystery Jets, Friendly Fires and Love Is All. Maximo Park even personally requested the band to support them on their tour as interest from independent record labels, unsurprisingly, started to grow.

In July 2008 the band released their debut AA side single on limited 7? vinyl, via the Adventures Close To Home label (Holy Hail, Free Blood). Side one, ?Tak o Tak', was shimmering pop for the dancefloor, complete with stark guitar clatters and a Korg hook that burrowed into your brain and bobbed about. Its neighbouring ?Bardou' showcased a softer, more cathartic Stricken City, courtesy of its mid-pace prowling and Raa's building purrs. The single, of course, sold out.

The follow up ?Lost Art' was released via Blue Flowers Records (Flashguns, Leona Naess) on November 17th, preceeded by a small tour of the UK and Paris and some more recording to round off a year that has seen Stricken City move far away from a maths class day dream. 2008 has seen them dubbed a highlight of both The Camden Crawl and The Great Escape festival, top the Myspace Chart on MTV TWO and sell out their first release, while Rebekah Raa guest-starred on Sportsday Megaphone's debut album, contributing to a song co-written by the singer, with more collaborations in the pipeline.

The band released their first album, 'Songs About People I Know', in October 2009. This was followed by a 'name-your-own-price' download EP in March 2010, entitled 'Animal Festival'.

The band came to an end in 2011 with a final album, 'Losing Colour', and a farewell, hometown gig at The Drop in Stoke Newington, London, UK.

Songs About People I Know